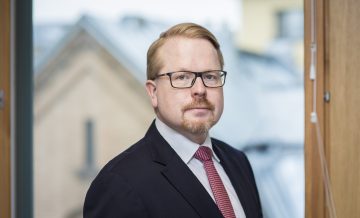 The Baltic Sea creates a shared neighborhood of nine countries and forms a common environment which has several remarkable characters to be highlighted when assessing international cooperation in general, but in more detail when analyzing internal security. Bilateral and multilateral relations between countries around the Baltic Sea form the very immediate and natural international sphere of cooperation. We have to follow and be aware of phenomena and changes in our operative environment.

The Baltic Sea is at the external borders of the Schengen area. Finland, Estonia and Russia are situated around the Gulf of Finland and share sea border. Moreover Norway, Finland, Estonia, Latvia and Lithuania share land border with Russia. When it comes to law enforcement and border guard cooperation, the external border of Schengen area and moreover of the European Union brings out specified needs and courses of action. The Baltic Sea is a key operational environment for the organized crime groups and their actions in drug trafficking, illegal immigration, frauds and other serious cross border criminality. All security issues and serious and organized crime around the Baltic Sea are cross border by definition.

To tackle these challenges the Heads of States of the Region of the Baltic Sea decided to enhance and formalize cooperation in the area of internal security by founding the Task Force on Organised Crime in the Baltic Sea Region (BSTF) in 1996. The BSTF is formed by all eleven Baltic Sea countries. Mission of the Task Force is to plan and carry out cooperation in tackling organized crime by improving regional exchange of information and enhance cooperation on legal matters, training and research. The Operational Planning and Coordination Meeting gathers together two to three times a year to discuss the operational needs to fulfil goals set by the Strategic Meeting. Cooperation and dialogue from the operative level to the strategic and ministerial level is crucial.

The Baltic Sea Region Border Control Cooperation (BSRBCC) was established the same year as the BSTF. The initiative of BSRBCC was launched by the minister for foreign affairs of Finland, Mrs. Tarja Halonen, and The Finnish Border Guard invited the first official meeting of BSRBCC in 1997. During this meeting it was announced that cooperation among border guards in the Baltic Sea region is to tackle for instance, irregular migration and cross-border crimes and to enhance information exchange between neighboring countries and their respective border authorities.

The main strength of the BSTF and BSRBCC is that eleven countries participate in the cooperation with their respected law enforcement, border guard and custom authorities. This enables multilateral cooperation but also enhances bilateral cooperation between the countries in question. The Annual Strategic Meeting of the Personal Representatives of the Heads of Governments of the BSTF and the highest body of chiefs of national authorities of the BSRBCC forum sets the strategic and political goals for the cooperation.

Shared and comparable analysis of the serious crimes at the Baltic Sea serve countries’ national authorities to carry out their duties efficiently. This strengthens the law enforcement activities of the Baltic Sea Region significantly. Coordinated activities, such as joint operations, are at the core of the practical cooperation. The cooperation has led to concrete results in tackling serious and organized crime. It has also been agreed to include several strategic topics such as exchange of information on border situation, border traffic and illegal migration. The exchange of best practices related to border surveillance is also one of the key cooperation areas.

Moreover, regional and global law enforcement agencies Europol and Interpol are involved and the existing structures and practices for information exchange are enhanced. As BSTF and BSRBCC members share best practices and analyses, agencies like Europol and Interpol have a crucial role to play when common activities are analyzed from a regional point of view. This cooperation should not duplicate any of the existing cooperation but instead in its multiple formations bring added value to the work of Europol and to the bilateral work between the Baltic Sea states. As an example of a practical implementation, the BSTF also puts in action the policy area “Secure” of the EU Strategy for the Baltic Sea Region.

Cooperation is based on unconditional trust and equality of member states. This cooperation offers in practice a mechanism for authorities working with law enforcement issues to enhance security in the Baltic Sea Region in general but also regional border security as part of EU four tiers border security model observing cooperation with third countries.

Baltic Sea model has also been an example or basis for several other regional cooperation forums globally. The best experiences and practicies of this cooperation have been copied and used as examples on other regions such as Mediterranean and Black Sea areas.