China is also the world’s largest consumer of energy. It consumes approximately a quarter of all energy consumed globally. In comparison, India, the country with the world’s second largest population, consumes only six per cent of the world’s energy. The structure of Chinese energy consumption does not meet the requirements of the modern world. Almost 60% the energy needed by China is produced from coal. In the United States, which is the world’s second largest energy consumer, coal accounts for less than 15% of the country’s total energy consumption. It is worthwhile to note that China consumes more than half of all coal consumed globally and is thus perhaps the most significant driver of global warming (BP).

We in western countries can make purchase decisions that will accelerate China’s transition to cleaner energy as exports play an important role in the Chinese economy. Exports account for almost 20% of China’s GDP. The corresponding figure for the United States is less than 10% (WTO).

China is not particularly dependent on the coal imports. China imports less than one tenth of the coal it consumes. China’s import dependence is much greater with regard to other fossil energy forms than coal. China imports 70% of the oil it consumes and over 40% of the natural gas it consumes. However, when assessing China’s overall energy import dependency, it should be noted that oil and natural gas together only account for just over a quarter of China’s primary energy consumption (BP).

China is the world’s largest exporter. It accounts for around 13% of world exports (WTO). The huge volume of Chinese exports is reflected in China’s significant share of imports in other countries. There has been a fair bit of public debate about China’s silk road programme and China’s economic role in Africa, but less attention has been given to China’s influence in Asia and South America. The maps at the end of this article provide a summary on China’s significant position as a country of import around the world and the exceptionally rapid growth of China’s economic influence over the last decade. In this context, I cannot help but mention that China accounts for more than a fifth of US and Russian imports.

In 2018, China, including Hong Kong, attracted one fifth of the global FDI inflow. Two decades earlier, China’s share of the world’s investment inflow was half of what it is currently. China’s role as an investor in other countries has grown even more rapidly than this. Just 20 years ago, China together with Hong Kong only accounted for 2% of the global FDI outflow. Currently, China already accounts for more than 20% of this (UNCTAD).

The Chinese spend by far the most money on their journeys abroad compared to the citizens of other countries. In 2018, the Chinese spent nearly USD 280 billion on their trips abroad, which was almost double of what American tourists spent abroad. On the other hand, it is worth noting that many foreigners also travel to China. In 2018, foreigners made more than 60 million overnight trips to China. The majority of foreigners travelling to China came from other Asian countries (UNWTO).

More precise information on China’s external economy can be found at: 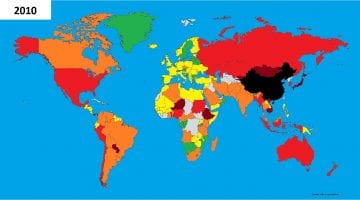 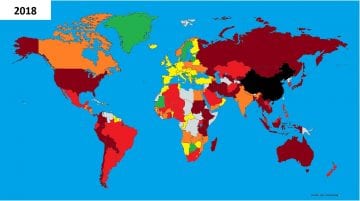