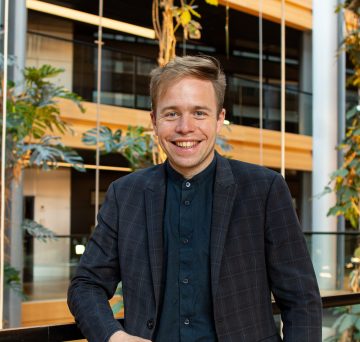 The European Green Deal is a well known European legislative framework. It gives principles and guidance on how to reach climate neutrality and an overall environment friendly approach within the EU legislation and everything which is linked to it such as funding criteria or quotas.

As someone who has lived near the Baltic Sea all my life, ocean protection is very important and dear to me. And I am working on European laws that have a direct impact on seas and oceans.

The conditions of our oceans are dramatic. Although our oceans and seas are of major value, we often abuse them and try to squeeze the last bit out of them – with terrible consequences. We have destroyed many habitats on the seabed and many species have difficulty reproducing. The Baltic Sea is one of the most polluted seas in the world. At the same time, almost half of the EU’s population lives less than 50 km from the sea and the ocean is crucial to the European economy. Yet key EU policy instruments are not geared towards protecting the seas.

As a member of the committee on budgets I am working to ensure that EU money flows into the transformation towards a more sustainable economy. We need to spend more money on biodiversity and should stop funding ecologically harming projects, like for example Nordstream 2 or nuclear energy.

Blue New Deal
That is why I am calling for a new deal between the ocean and the people: I made a concrete proposal for a Blue New Deal, that leads to a healthy ocean, allowing future generations to connect with the ocean and enjoy its full potential while protecting marine life. In order to reach this objective we need an engaged civil society to pressure politicians and business people to take leadership.

One major point is of course unsustainable fisheries, eutrophication and aquacultures. We can’t afford to continue with business as usual – we need a stronger protection of marine species and habitats, and a transition to more sustainable, low-impact fishing.

The marine ecosystem in the Baltic Sea has been in a fragile state for decades. Scientists always had a clear message – we need to urgently protect the Baltic Sea and reduce human pressure on it. Despite that, political action has not been ambitious enough. For example, scientific advice was not followed when it came to setting fishing quotas, which led to overfishing.

The climate crisis is a major threat to our ocean primarily due to ocean warming and extreme heat waves, which can result in the collapse of whole marine ecosystems and put some species in serious danger.

The biodiversity crisis threatens marine life in all European seas and in a very worrying way the Baltic sea, due to the combined impacts of anthropogenic activities on land, in the air and at sea, which are exacerbated by climate change. Sea-level rise is posing significant challenges for coastal communities in combination with other human-induced processes such as coastal erosion and flooding. Plastic pollution including abandoned, lost or disposed fishing gears and toxic biochemical flows are major threats to the marine ecosystems and oceanographic processes with significant impacts on present and future generations.

Another issue we have to address in the Baltic Sea is that we need to invest more into research, assessment and removal of military ammunition abandoned in the sea following the end of the First and Second World War.

We already have plenty of detailed and clear scientific research that can guide us and help us in solving these challenges. We also already made policy commitments on the global, European, and national level. So we have a framework in place, but we have to implement it. We need to work together on all levels and we have to be dedicated, coordinated, and consistent to give our oceans the opportunity to recover.

FuelEU Maritime
Last but not least: the shipping sector: In addition to my position in the committee on Budgets, I am responsible for EU Maritime Fuels in the committee on industry and energy. This regulation requires ships to progressively switch to sustainable maritime fuel in order to support green waterborne mobility and transport, which would also have a direct impact on improving the environmental state of our oceans.

Unfortunately, big fights still lie ahead of us. We had hoped for ambitious greenhouse gas reduction targets and effective measures to incentivise the uptake of sustainable fuels like renewable-based e-fuels. But the proposal that is on the table is very disappointing and has been labeled a “climate disaster pathway” by environmentalists.

The proposal for the FuelEU Maritime Regulation actually falls drastically short of delivering a pathway to zero-emissions in the maritime sector by 2050, let alone 2040. It introduces overall greenhouse gas intensity targets for energy used on board, yet while doing so it risks incentivising massive uptake of only marginally greener, yet very cheap and still harmful fuel alternatives, like LNG. It might also drive unsustainable demand for biofuels, which -even when produced sustainably- should better be channeled into otherwise hard to abait sectors, like aviation, where no other green alternatives are available.

The proposal also completely disregards the potential to substantially cut greenhouse gas emissions in the short term by harvesting the operational and energy efficiency solutions available as of today to ship owners (e.g. slow steaming, wind assist, improvement in engine efficiency etc). That alone could achieve about 40% emissions by 2030. This omission of energy efficiency measures is defended with an uncritical trust into market forces and the naive belief that higher fuel prices will be sufficient  to incentivise the implementation of energy efficiency measures.  Moreover, the obligation to use on-shore power supply or zero-emission technology in ports is unjustifiably delayed to 2030 and plenty of exceptions are foreseen.

We as Greens/EFA want to set an ambitious yet predictable regulatory framework for the swift transition of the maritime sector towards a highly energy efficient and fully renewable based approach.  We do not see any room for fossil fuels, nor for the use of unsustainable biofuels or the unsustainable demand for advanced biofuels.

To reach a good environmental status for the Baltic Sea and beyond, a mobilisation across all actors in society and a strong governance including citizens is needed with all socio-economic activities considered in relation to their impact on the ocean. To achieve this, positive ambitious visions and holistic solutions that are being co-developed with local communities and all relevant stakeholders across scales in a long-term participatory and systemic process will be paramount.

I call for a Blue New Deal “cross check” of all EU legislations congruent with marine and coastal policy, taking into account the complexity and interlinkages between humans and the ocean is strongly recommended. We need a radical shift not greenwashing by weak legislation. That is what we are standing for at the European level and I count on the new German government to fight alongside for clean oceans and a healthy Baltic Sea.