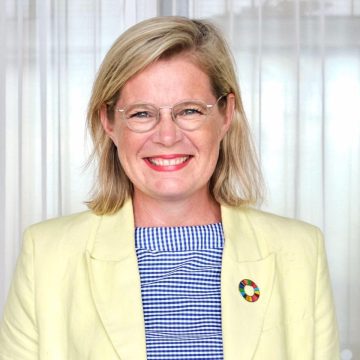 The European Green Deal is an ambitious set of policy initiatives presented by the European commission, with the aim to reach climate neutrality by 2050. The target of climate neutrality is prescribed in the European Climate law and is legally binding. The Green Deal package includes several policy goals initiated by the European Commission and covers a broad scope of measures, some of them completely new and other revision of existing legislation. While climate neutrality by 2050 is the long-term goal, a large part the work must be done already by 2030. The union has defined the target of reducing the emissions of greenhouse gas by at least 55% by 2030, in comparison to the levels of emissions 1990.

The EU Strategy for the Baltic Sea Region has aimed at building trust and fostering cooperation around the Baltic Sea to reach common goals of clean sea, well-connected region and increased prosperity of its inhabitants. The aim is now to turn challenges into opportunities for sustainable growth in BSR. We need the whole ecosystem and all stakeholders to work together towards common objectives. Real impact is based on co-creation and collaboration. This is the way to work also with the Green Deal.

Around the Baltic Sea, there is a strong sentiment towards the flourishing Hanza times. Maybe that is why the trade, economic cooperation, innovation and the acknowledgement of the role of the business in the Region’s prosperity is that high. Now, this can only be achieved if the needs of nature are on the basis of all.

The European Committee of the Regions’ Baltic Sea Region Intergroup has set a vision: we want it to be the leading innovative and people-centred region. A goal that clearly everyone from around the Baltic Sea could sign for.

What does the European Green Deal mean for the Baltic Sea region? With regards to the inherently broad mission to reduce greenhouse gas emissions, it goes without saying that the Green Deal will have some sort of impact on the vast majority of activities in the region. The measures needed according to the Green Deal will affect the way we produce, invest, move and consume. More explicitly, the Green Deal entails priorities to protect biodiversity and vulnerable ecosystems, reduce pollution on land and in waters, facilitate the transition to a more circular economy, modernize waste management as well as find a way to create a more sustainable fishery sector. The Green Deal also includes objectives to make the blue economy in the EU more sustainable.

Measures that are highly relevant for the time being are, among others, plans on increasing renewable offshore energy sources, such as wind power. In order to boost the sector and reach its full potential, the Commission has underlined the importance of cross-border cooperation between different member states of the Union. This serves as another good example of the importance of close contacts and collaboration between countries in Europe, starting from grassroot initiatives at the local level.

To facilitate a transition to a more sustainable Baltic Sea region it becomes clear that the public sector alone will not be able to carry through the necessary transition. An increasing need for private actor involvement and projects is evident, and the only way forward to make a sustainable change towards a climate neutral society. Many ground-breaking ideas and innovations have derived from the private sector and will continue to do so. The channels between the public and private sector have to be kept  open and encouraging. The more visions and ideas that are generated, the stronger the likelihood of finding new, sustainable ways forward.

Clear economic incentives are crucial to mobilize private actors and entrepreneurs to participate. Several EU funds are already available for businesses within the EU, such as Interreg. It is possible and encouraged for member states to utilize the Recovery and Resilience Facility to invest in projects. A new tool is the Interregional Innovation Investments (I3) instrument with total budget 570 million euros. Now there is money – we only have to find the ways to use it wisely, and for common good.  An interesting possibility is also to promote the impact investing which is a process of investing in companies, funds, or firms that are dedicated to improving the environment or society while also providing a financial return for investors.

Many success stories of the EUSBSR implementation prove that all ecosystem should be involved right from the beginning, when we create the strategies, and stay involved all along. Various initiatives prove that business involvement is crucial also when it comes to real implementation of Green Deal goals.

The strength of the Baltic Sea region lies in the long history of cooperation and its versatile networks. These will play a key role in delivering the European Green Deal in the areas linked to the Baltic Sea. Now it is time to find new partners, and warm it up with the old ones, and do the Green Deal together – and make it big.

* The article has been produced in co-operation with Jenny Vuorenlinna, Kuntaliitto Brussels.