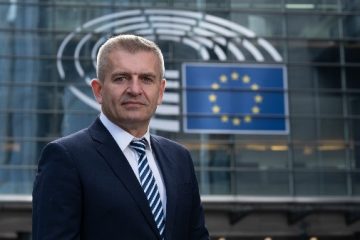 Bartosz Arłukowicz,
Member of the European Parliament,
Chair of the Special Committee on Beating Cancer

For more than a year now the whole world has been preoccupied with the fight against the COVID-19 pandemic. Most of the countries have struggled to find a proper balance between the need to protect public health and the preservation of at least a rudimentary form of economic and social activity. At the same time, the health care services of even the most developed countries have been overwhelmed by the number of patients in need of intensive care and access to ventillators. All of this showed both the policy-makers the urgent need to better organise the provision of health services, but also the need to show courage when faced with serious health crises.

An example of Poland is an interesting lesson on how not to wage a war against a pandemic. For more than a year now, the Polish authorities managed the crises incoherently, chaotically, without a vision, and a will to listen to its critics. As a result of clear political mistakes they contributed to the worsening public health situation in Poland. Obviously, not every government reacted properly to the pandemic. Most, if not all, were not prepared for such a volume and quick spread of the virus. Some may say that with the benefit of hindsight, it is easy to judge. However, the course of the pandemic in Poland was a witness of political actions that undoubtedly led to an increased incidence and mortality caused by COVID-19. The pandemic in Poland began in March 2020 and in the first weeks developed slowly. The authorities reacted similarly to its partners in other EU countries. They introduced a full lockdown, a ban on mass gatherings, an obligation to wear protective masks and a rule stipulating that citizens can leave their houses only for essential purposes. So far, so good. However, the political calendar in Poland indicated that in May 2020, the Presidential elections should take place. Despite the inability of organising an electoral campaign, the government initially pushed for holding the elections according to the original schedule. However, under an increasing pressure from the public, they decided to postpone them until July. It was hoped that the situation would by then be under control.

During the campaign the state officials engaged in a full-scale action of undermining the gravity of the situation. The Prime Minister, Mateusz Morawiecki, went on to say that “(…)everyone, especially seniors, should not be afraid of anything, they can go to the elections. In summer, the flu viruses and the coronavirus are weaker, much weaker”. The highly divisive elections culminated in the record turnout of 68%. This, in turn, led to record high numbers of infections both in July and August. The Presidential elections and the comments on the part of the government openly dismissing the gravity of the pandemic were among the root-causes of a more serious course of the pandemic during summer 2020 than in other European countries. But there was more.

The Polish authorities had huge problems with mass testing from the very beginning of the pandemic. Interestingly enough, during the course of the health crisis, the ratio of the number of tests showing a positive result to the daily total number of tests performed in Poland is around 20% (1 test in 5), while in the UK it is 3.23% (1 test out of 31). The inability, or lack of willingness, to test the population led to a skewed view of the real threat. The authorities could not assess the future actions, because they did not employ all the tools on the basis of which they could do so. The lack of accurate monitoring led to a situation whereby in March and April of 2021, Poland had a similar numbers of deaths per 1 million inhabitants to Brazil, which was at the time the hardest hit country in the world.

On top of all that was a lack of consistency, which dissolved trust in the actions of the government among the citizens. This, in turn, led to the increasing defiance of the introduced restrictions. For example, on April 1, 2020, hairdressers were forced to close when the number of daily cases was 243, with 10 deaths from COVID-19. On May 18, 2020, it was decided to open hairdressing salons, when the daily number of cases was 356, and 11 deaths per day. The ski slopes, which were closed on December 17, with 11,950 cases and 431 deaths per day, opened on February 5, when there were 6,054 cases, but 367 people died from COVID-19. All of the above led to a growing resentment among the Poles.

The short description of the course of the pandemic and the mistakes made by the Polish authorities indicates several lessons for the future health crises. First of all, in order to ascertain the real picture of the situation, mass testing is an absolute must. Moreover, the governments cannot shy away from taking responsibility for its actions. When there is a need for tough measures, the authorities should not hesitate to introduce them. Thirdly, the messages coming from the government must be consistent. Sometimes it is better not to say anything than to keep contradicting itself on a daily basis. And above all, nobody should publicly undermine the impact of the crisis. It is better to do too much, than do too little. Such comments can lead to tragedies among many families. We have a lot to learn from the last 14 months, but we should learn quickly