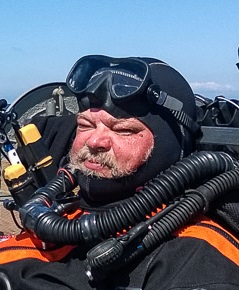 It is highly probable that the reader is already aware of the environmental problems and issues the Baltic Sea has. Eutrophication is intensified by climate change which increases rainfall in the Baltic area and further impairs naturally poor water exchange. Harmful substances are another big scale problem in the Baltic. And of course there is the ever present threat of a major oil accident, as the Baltic Sea, and especially the Gulf of Finland has become a major oil transport route.

In addition to the major problems, there are smaller ones which are not nearly as significant, but on smaller, local scale can be potentially very damaging. One of these lies in the wrecks which litter the bottom of the Baltic Sea.

The Baltic has always been an important trade route. After Czar Peter the Great established St. Petersburg in 1700, this trade has continued to intensify. The Baltic Sea is very difficult to navigate and highly seasonal. Also, every war fought in Northern Hemisphere has also been fought in the Baltic, over who rules the crucial trade routes of this inland sea. Timber, tar and hemp for navies of the sailing era, and Swedish iron ore for the ironclads: The Baltic Sea rim has always been significant source of produce. As an end result, navigational hazards and wars have produced a multitude of wrecks that litter the seabed under the trade routes.

The Baltic Sea, due to its low salinity, coldness and dark deep water causes physical, chemical and biological decaying processes to be very slow, much slower than in oceanic salinities. Hence, the Baltic is a perhaps the most significant source of uniquely preserved underwater cultural heritage. However, the time is ticking, and the rust never sleeps.

Since early 20th century, increasing number of ships, especially warships began to use oil as fuel. Many of these ships were lost in the Baltic during World Wars, especially to mines which were extensively and effectively used. All these wrecks now rest on the seabed, as a mute reminder of war, as historic objects – and forming a potential environmental threat.

At violent sinking, a ship may lose most of its fuel into the sea. However, that is not always the case. A WWII destroyer wreck in the middle of Gulf of Finland may still have several hundred tons of fuel oil in her bunker tanks. Several vessels still carry their fuel. Of course, in comparison to a major sea accident of big tankers colliding or hitting rocks, this is small potatoes. But at the worst possible moment, tens to hundreds of tons of bunker oil may create a significant environmental problem: imagine Gulf of Finland in March-April, sea full of melting remains of sea ice, thousands of returning waterfowl resting among the floes – then add a hundred tons of 1940’es high Sulphur content, wartime oil in the mix.

The technology to recover oil from wrecks is available, and already has been used in the Baltic. However, these operations are not cheap. And the difficulties do not end there. Most significant warship wrecks were at full battle readiness when they met their fate. Guns loaded, ready ammo racked and available, depth charges loaded in throwers, reloads stacked by. Torpedoes in launcher tubes, possibly mines on deck rails, ready to be launched. And in most cases, the whole thing is wrapped in a few pelagic trawls and gillnets. In the relatively shallow waters of the Baltic Sea, trawls and gillnets stick to wrecks, becoming derelict fishing gear (DFG), “ghost nets”. In addition to effectively killing fish and marine mammals for years, they together with unexploded ordnance form a very effective obstacle for oil removal operations.

The wrecks are there, slowly rusting away. While they do not form the biggest threat to the environment of the Baltic Sea, we should not forget them despite they are out of sight. Removal of oil from wrecks costs an order of magnitude less than removing the same oil from sea or shores. To start somewhere, at least the locations of potentially environmentally hazardous wrecks should be established, and their present condition assessed and recorded. There already is a wealth of data produced by general and specific seabed surveys, such as Nord Stream gas pipeline surveys which produced a significant dataset of seabed around the pipelines, including many wrecks which may be environmental threats. Authorities responsible for seabed surveys are intensifying the efforts of gathering information of these wrecks. Also, in the Baltic there are many volunteer groups of recreational and technical divers researching sunken cultural heritage, i.e. wrecks. There are many volunteer diver groups who successfully monitor and remove ghost netting from wrecks. Combining the resources of authorities and volunteer groups could be utilized increasingly for wreck monitoring in future.

Lost but not forgotten – Because if we do, they may remind us in a rather nasty way.