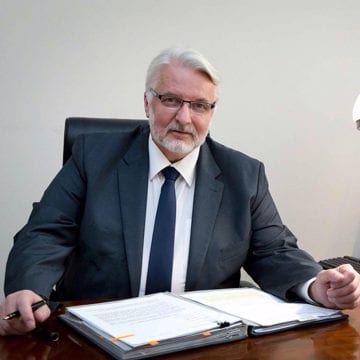 Putin’s Russia has been rebuilding its superpower status since it lost a while back. Vladimir Putin openly argued that the demise of the Soviet Union was the greatest geopolitical catastrophe of the 20th Century, as well as a genuine tragedy for the Russian people. His words were universally understood as an obligation to restore Russia’s might and importance to match the USSR. This plan has been carried out through the rebuilding of its military power. Among the means used are armaments and advanced military maneuvers featuring training in aggressive military operations. Together with Belarus, Russia even undertook simulated nuclear strikes against Poland.

Russia cannot take back its former republics. It has been, however, trying to establish dominate influence over them, over what it considers its “near abroad,” the russkiy mir. Hence, the aggression against Georgia and Ukraine, and Moscow’s destabilizing actions in the Caucasus, Transnistria and Central Asia. During Josep Borrell’s latest visit to Moscow, Foreign Minister Lavrov openly rejected calls for cooperation with the European and Transatlantic institutions. He did not signal Russia’s willingness for peaceful conflict resolution anywhere where Russia has been involved.

Up until now, the attempts to contain Russian imperialism and to peacefully solve the conflicts that Moscow started have had limited success. Since 2008, there has been no peace in Georgia. In late 2020, we all witnessed another stage of the Nagorno-Karabakh conflict, right at Georgia’s doorstep. The showdown between the Armenians and the Azerbaijanis has been following the scenario crafted in Moscow. For decades, the OSCE mechanism has not been able to put an end to the conflict.

Russia’s aggression on Ukraine is into its seventh year now. The Normandy Format and the Minsk Peace Process stopped full-blown war but the conflict has not been resolved. For more than half a year, Moscow has been backing the Belarusian usurper who rigged the election and managed to keep any efforts of democratization at bay.

Russian interference has been soaring across Transnistria, Moldova and the Balkans. Russia does not restrain itself from meddling into EU and NATO affairs. Most widely used tactics include shady business deals, political and economic corruption, spreading propaganda and cyber-attacks.

The Central and Eastern Europe’s circle of friends in Western Europe is limited. Old Europe has been daydreaming about the days of splendid isolation. During the Cold War, due to the decisions taken in Yalta, the problems of our part of Europe were managed by the Soviet Union. The western part of the continent was able to undergo economic and integration experiments and to enjoy welfare under the American nuclear umbrella. Following the collapse of the USSR, both new and frozen problems of the East were added to the agenda of the European institutions. The ability to solve those issues, while facing the aggressive and revisionist Russia, is too much to handle for the institutions and the political class in Europe. Paradoxically, due to the lack of will and imagination, Central and Eastern Europe has been looking up to Washington with hope for a free, democratic and united Europe. Today, America is able to overcome conflicts of continental magnitude. Will the new administration of Joe Biden help us defend ourselves and stop Russia?

In his first presidential address on international issues, Biden pointed to China as the US’ main opponent. Russia’s attempts to disrupt American democracy took second place. However, the “America is back” narrative lacked any particular remarks on a number of international problems around the world.

Given Biden’s experience and considering his main foreign affairs related picks – Blinken, Sullivan and Carpenter, it is probably safe to assume that Russian issues and Europe’s security will not be overlooked. The hope is that the new administration will not fall for another opening, another reset or for deals with Moscow that would undermine the security interests of Central and Eastern Europe.

On the contrary, the expectation is that Team Biden continues what Obama and Trump started to further solidify Washington’s allies’ resilience against Russian pressure, provocations and blackmail. This will take more boots on the ground in our region, American leadership and support for military modernization. Focusing on infrastructure development and energy security, especially vis-a-vis Russia, is crucial.

Support and active participation in regional initiatives will also boost our resilience. The Three Seas Initiative (3SI) and Eastern Partnership (EaP) are examples of smooth cooperation with Washington. There is no need to preach to the choir – the US is well aware that those two initiatives combined amount to a 150 million-strong market. Our military and energy cooperation accounts for tens of billions of dollars. Reinforcing of this vast area, comprised of democracies, will one day create a counterbalance to the imperial and autocratic Russia. Our region will not fall for Chinese promises either.

At the same time, the hope is for the United States to make it more costly for Russia to break the international law and norms and to meddle in the region’s affairs. This will require punitive measures and the will to enforce them. Energy should be the primary focus of sanctions against the bellicose Russia, because trading with hydrocarbons allows Moscow to modernize its army and to finance Kremlin’s imperialistic adventures. Stopping the construction of the Nord Stream 2 pipeline is the obvious first necessary step. Unfortunately, European politicians and institutions lack the will to halt Russia’s ability to acquire funds for military spending.

Russia’s belligerent policy must be met with our will to confront it in defense of our independence and sovereignty. Josep Borrell showed us what not to do with his recent behavior in Moscow. Let us hope the new American administration will be the indisputable leader the transatlantic community needs to face our challenges.