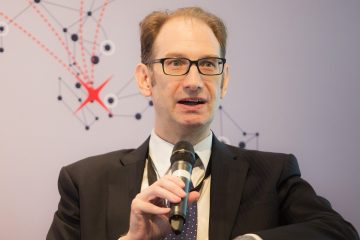 Over the past two decades, the Baltic Sea Region – from the Baltic states to the Nordics – has developed into an integrated, high performing economic region. It is called the ‘top of Europe’ for a good reason.

The Baltic Sea Region economies have performed strongly since 2000, out-pacing many of their European peers. As a group, they have averaged a GDP growth rate of 2.7% relative to 1.6% for the EU28 as a whole.

And the strength of this convergence process has out-paced other parts of Europe. For example, the three Baltic states moved from an average of 30% of the EU 15 average income in 1995 to 60% today (on a PPP basis), more rapidly than the small central and eastern European transition economies that moved from 45% to 60% of the EU  average.

Deepening integration within the Baltic Sea Region has been integral to the economic success of the region. Over the past two decades, there has been substantial growth in cross-border flows of goods and services, capital, firms and people. Regional connectivity has also been strengthened in multiple ways, from infrastructure to regional institutions.

But there are several emerging challenges and opportunities that these economies will need to respond to in order to sustain this recent performance. For one thing, many Baltic Sea Region economies are facing aging populations. A greater contribution will be required from labour productivity growth – and at a time when productivity catch-up gains are less available because the Baltic Sea Region economies are closer to the income frontier.

Second, the global economic and political environment that has supported Baltic Sea Region growth is facing a series of risks – from protectionism, to the weaponisation of international commerce through sanctions, to heightened geopolitical uncertainty. Open economies are deeply exposed to these dynamics. Many Baltic Sea Region economies were impacted by the Russian sanctions, for example, and are exposed to the threats of further protectionist measures.

And third, disruptive technologies such as automation and AI are bringing a series of new growth opportunities as well as the potential to disrupt labour markets and economies. There are clear opportunities in terms of productivity, which will overcome the negative impact of aging populations and high labour costs across the region. But capturing value from these technologies will require significant investments in skills and in new business models.

In response, there are three types of action that are important for the Baltic Sea Region economies. First, policies to improve national competitiveness and to position individual Baltic Sea Region economies to respond to increasingly intense global competition and disruptive technologies. This will involve ongoing investments in research, innovation and human capital; reform of labour markets and social insurance; fiscal discipline; and maintaining an external orientation. There needs to be an intense focus on lifting labour productivity.

Second, actions to further strengthen integration in the region and to respond to new opportunities, such as the potential to lead deeper connections between Europe and Asia. For example, the emergence of the Arctic Route offers many new opportunities to the region. It is instructive that many of the Baltic Sea Region economies are in the lead in Europe in terms of developing economic relationships with China and other parts of Asia.

Third, acting to develop a coherent voice on regional and global issues of common concern. There is some evidence that this is beginning to happen. For example, the joint statements released by the so-called ‘Hanseatic League 2.0’ – the Finance Ministries of Denmark, Finland, Sweden, Estonia, Latvia, Lithuania, as well as Ireland and the Netherlands – on issues relating to European reform. As existing regional and international institutions come under stress, the Baltic Sea Region economies will need to think creatively about establishing new platforms.

The international economic and political environment is changing rapidly, and this will have a meaningful impact on the open economies of the Baltic Sea Region. In order for these economies to sustain their ‘top of Europe’ performance, determined efforts will be required at home and abroad.