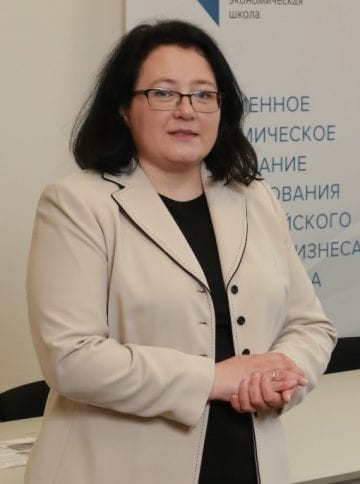 Russia’s geographical position looks very favorable for the development of its integration potential. The presence of large markets at different levels of economic development in the West and in the East is a unique situation that can provide great economic benefits when implementing a sound development strategy. Unfortunately, so far Russia has been able to benefit very little from this. Besides the natural resource sectors, very few industries have managed to explore the opportunities. Russian trade policy over the last 30 years has a few important flaws which make this potential difficult to realize.

One of the manifestations of the problem is the very unbalanced involvement of the Russian economy in Global value chains (GVC). On the one hand, the overall level of GVC participation measured as a share of the country’s export which was either produced with imported inputs (backward GVC) or was exported to foreign countries for further processing and then exported to third destinations (forward GVC) is comparable to many OECD countries. However up to 80% of this score is defined by forward GVC involvement which is essentially the export of natural resources, both fuel and agricultural, to foreign countries where they processed and exported further. Very few Russian companies participate in more sophisticated backward chains, which involve importing inputs, processing and exporting them abroad. The benefits of this sort of GVC are two-fold. On one hand, input importing allows firms to achieve higher productivity compared to a situation in which they use domestic inputs. Russian importing firms are on average 60% more productive than non-importing firms of comparable size in the same industries. On the other hand, output exporting allows firms to reach larger markets compared to domestic sales only. The scale effect also contributes positively to firms’ productivity and increases their competitiveness worldwide. Russian importing firms which also export enjoy 30% higher productivity on average relative to importing firms overall.

Obviously, trade policy which supports this kind of integration requires a balance between import liberalization and export facilitation. And while export facilitation policies are considered to be an important priority by the Russian government, the attitude toward imports is not that liberal. The protectionist nature of Russian economic policy has many shapes. Import substitution is the most obvious one, which implies some support of inefficient producers at the expense of Russian consumers and more efficient domestic firms. However, there is little objective justification for import substitution policies in Russia.

From a macroeconomic perspective, Russia consistently enjoys a trade surplus. Since 1990, Russia has never faced a trade deficit, while a trade surplus has been recorded as high as 20% and 10% of GDP on average. Unemployment in Russia also is low, and demographic development makes the scope for its increase even less probable. From a structural point of view, the composition of Russian imports is quite diversified and not significantly different from other countries in the world.

So, while both import volume and its structure do not present a problem for the Russian economy, it is export structure which constantly presents a threat to its macroeconomic stability. Low export diversification due to the very high share of natural resources and volatile resource prices is the main source of external vulnerability for the Russian economy.

Can import substitution policies help resolve the low export diversification issue?  Hardly, in view of the discussion above. Polices which make the import of inputs and equipment more costly undermine an important source of firms’ competitiveness and result in a low level of economic involvement in backward GVCs. So, not only are imports substituted by domestic output, but potential for export sales is threatened as well.

Unfortunately, both the structure of the economy and the political economic landscape in modern Russia strongly support the import substitution in economic policies. Politically strong traditional sectors dominate manufacturing, contributing to its inefficiency and requests for protectionist policies. At the same time, in the political sphere, national security concerns and geopolitical considerations totally dominate economic and development policy objectives. So, there are neither strong economic agents nor political forces to call for the subordination of economic policies to the priorities of foreign economic integration or to use foreign policy instruments for the interests of developing the international trade of the country and not vice versa. However, without revisiting the principles of foreign economic policy, both non-resource export expansion and long-term sustainable growth of the Russian economy in the world seem unattainable.