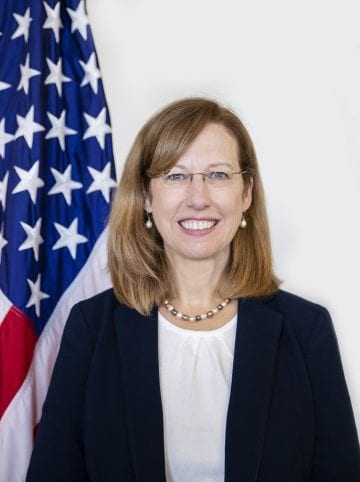 In January, Americans celebrated the resilience of our democratic institutions when President Biden swore an oath to protect the U.S. Constitution against all enemies, foreign and domestic.  The President’s words were especially resonant in Kyiv, simultaneously underscoring the values we share and the challenges we face alongside the people of Ukraine.

The arrival of a new administration, of course, prompted questions from our partners about how the U.S.-Ukraine relationship might change. President Biden has been clear that “America’s alliances are our greatest asset, and leading with diplomacy means standing shoulder-to-shoulder with our allies and key partners once again.”  Secretary Blinken, in his first call with Foreign Minister Kuleba, emphasized the priority the United States places on Ukraine’s sovereignty, territorial integrity, and Euro-Atlantic aspirations and pledged continued economic and military assistance. I am confident our relationship will deepen and grow stronger as we work together to bring peace and prosperity to Ukraine, and I am proud to be leading our Embassy in Kyiv during this critical time.

Ukraine faces dual challenges that are as daunting as they are complex, even more so against the backdrop of the worldwide challenge of COVID-19. Externally, Ukraine is fighting against Russian aggression on multiple fronts, including Russia’s occupation and attempted annexation of Crimea, the Russia-led conflict in the Donbas, and cyberattacks and disinformation spread both from Russia’s territory and through Russia-directed Ukrainian proxies.

Internally, the fight against corrupt and vested interests is equally important.  Their primary goal is their own personal enrichment, achieved by any means possible.  We also see some vested interests joining with Russia to sway representatives in the Rada and spread anti-Western narratives through their media holdings and social media.

Defeating these forces will require strengthening institutions that can hold accountable those who subvert the will of the Ukrainian people. Weakening their hold on Ukraine’s economic and political systems will not only unlock prosperity for the Ukrainian people, but also reinforce Ukraine’s Euro-Atlantic orientation by rooting out false information.

While the United States is clear-eyed about the challenges, we also remain optimistic about the promise of progress. We work side by side with President Zelenskyy, other Ukrainian officials, and civil society representatives to support Ukraine’s trajectory as a prosperous democracy, secure in its internationally recognized borders.  We remain committed to working alongside our Ukrainian partners as they build strong and resilient institutions and carry out reforms to strengthen the rule of law and defeat corruption.  These steps will help attract more international economic and commercial partnerships, secure Ukraine’s economic growth, and strengthen Ukraine’s resilience in the face of external pressure.

The battle against COVID-19 across the globe is further proof of the critical need for strong partnerships among allies and partners.  For that reason, the United States is providing health and humanitarian assistance in Ukraine to help prepare laboratory systems, identify and monitor cases, support technical experts, bolster risk communication, and more.

The support of Ukraine’s Euro-Atlantic partners stands in sharp contrast to the actions of Russia and its proxies.  Russia has not only invaded the Ukraine, but actively pursued an aggressive information war by spreading disinformation in order to drive a wedge between Ukraine and its Western strategic partners, reverse Ukraine’s reforms, and turn Ukraine away from its westward trajectory.  Ukrainians have paid for Russia’s aggression with their lives, with more than 13,000 killed in the Donbas and more than 1.5 million displaced from their homes.  The economic damage is inestimable.

The United States response to Russia’s aggression remains as clear and determined as ever.  We will never recognize Russia’s attempted annexation of Ukraine’s territory, and we will continue to impose costs on Russia as long as it continues on its destructive path.  Further, our Minsk-related sanctions will remain in place until Russia fully implements the Minsk agreements and withdraws from the Donbas.  Our Crimea-related sanctions will remain in place until Russia returns control of the Crimean Peninsula to Ukraine.  We will never accept anything less than the full restoration of Ukraine’s territorial integrity.

We acknowledge that fighting two wars simultaneously – against Russian aggression and against the vested interests that want to keep Ukraine’s wealth for themselves – is extraordinarily difficult.  We support Ukraine because we see a country that, despite its difficulties, shares our commitment to a government by the people and for the people, to the rule of law, and to institutions that will stand up to challenges, be they foreign or domestic. Those shared values are the foundation for our continued work with the President and Prime Minister, the Rada, independent institutions, and civil society to achieve the Ukrainian people’s desire – expressed so dramatically in the Revolution of Dignity seven years ago and enshrined in Ukraine’s constitution – to create for Ukraine a prosperous and secure Euro-Atlantic future.