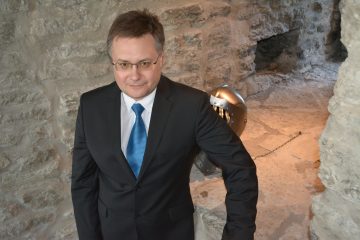 This article was submitted for publication in the middle of March. I do not know what the current situation on the fronts of the Russo-Ukrainian war is, but I am absolutely sure – Ukraine will never surrender, and Russia will be defeated.

Russia’s attack on Ukraine is not merely a local high-intensity armed conflict. This is not Afghanistan, Iraq, or Syria. A full-scale invasion of independent Ukraine, with the use of its full arsenal, alongside Russia’s demonstrable grave breaches of all possible rules and customs of war, is in fact an attack on the whole of Europe.

The fact that Russian missiles and bombs are not hitting Suomi just yet, should not mislead you. Hybrid warfare is always followed by a kinetic phase. The hybrid war reached its climax in the Euro-Atlantic world. The choice that Europeans are facing is very simple – it is either to fall victim or resist.

How does this affect Finland, a non-NATO nation? The Ukrainian example shows that no informal status, like the one laid down in the Budapest Memorandum, can in practice protect a country from a Russian attack.

Therefore, what is the ominous prospect for the Finns? Russia is rapidly turning into North Korea. That is, it will soon close its markets. In particular, Russian raw materials will no longer be supplied to Finland.

The rapid deterioration of Russia’s economy will lead to an outflow of economic refugees to neighbouring countries, where they could hypothetically be accepted. We all know what a Russian tourist is. Now, there will be economic refugees with their infamous customs and claims. The need for the de-Putinization of Russian society, similar to the denazification of Germany after WWII, is imperative, as the brainwashed Russian population is a dangerous mixture of nazism, fascism, communism, religious obscurantism and imperial ambition.

Russia’s seizure of the Chernobyl Nuclear Power Plant and attacks on other nuclear facilities, including missile attacks on nuclear reactors, make the prospect of a nuclear fallout look terrifyingly realistic. It should also be remembered that in Ukraine, the winds traditionally lead the airflows from the southwest in the northerly direction. We will thus be forced to forget about the world’s long-term fight for a clean environment as it is just hot air for Russia.

Now that the Russian invasion of Ukraine has finally revealed a deep systemic crisis in international relations in the political, economic, and social spheres, it has called into question the existing outlines of global security. A similar situation was observed in regard to the League of Nations before WWII. Today, however, the devastating effects of Russia’s war will hit all nations, at all levels. Everyone will be affected by this shock wave, and now it is only a matter of time.

Russia’s infamous objective is to re-establish the USSR. The military tools of this re-establishment are aimed at not only seizing territory, but also at blackmailing the West. Russia has long considered European democracies its geopolitical periphery. To this end, Moscow has been for years corrupting European politicians and planting its agents of influence. And now it has resorted to an act of armed aggression, which it is prepared to pursue until it gains the required concessions.

The offensive potential of the Russian army is currently being exhausted. Serious tactical blunders and a lack of human and material military resources were exposed during the initial period of hostilities. Russia is now demonstrating preparations for a protracted, positional war of attrition. At the same time, the Kremlin simply is not ready for this – either mentally or physically.

Therefore, scorched earth tactics are being applied, aimed at the total destruction of civil infrastructure and residential areas. Artillery shelling and air strikes have led to massive civilian casualties, accompanied by ever increasing cases of extrajudicial executions of unarmed civilians out in the streets. This, in turn, increases the already massive outflow of internally displaced persons to the western regions of Ukraine and refugees – to the EU. NATO is reluctant to introduce a no-fly zone and confront Russia, even if Russia does not have either the economic, or military capacity to confront NATO. Innocent Ukrainian civilians, women, and children die from Russian bombs, and it is a growing source of shame for the Western allies.

Russia sees no other solution to a problem, than the use of force. Europe will soon face the largest influx of refugees since World War II and an unprecedented humanitarian crisis.

The scale of this war will only continue to grow. This will inevitably hinder the spring sowing campaigns of Ukrainian farmers. Russian farmers will also be affected. Food and feed grain shortages will soon hit global markets. Europe and the Middle East, as well as parts of China, could face a major food crisis.

The war that Russia is waging in Ukraine is a war of civilizations. It is a frontier between the past and the future. The path the world will have to walk now depends on all of us.