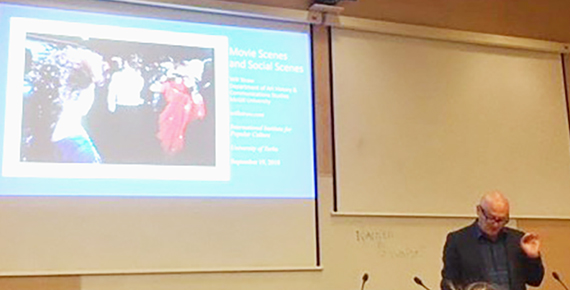 On Wednesday 19th of September the International Institute for Popular Culture (IIPC) held its 100th debate. The debate was presented by Professor Will Straw of McGill University, Canada, who gave a fascinating lecture entitled ‘Movie Scenes and Social Scenes’ to a packed audience in the Janus Hall.

This particular debate was obviously a very important high point for the IIPC and cause for much celebration. The Institute prides itself on its academic excellence and its international collaboration. This was strengthened in January 2010 with the establishment of a monthly series of debates, with the aim of presenting current research on a range of topics relating to popular culture.

IIPC Director Professor Susanna Paasonen opened the proceedings by welcoming the audience and celebrating the achievement of the IIPC in reaching this special 100th debate. She explained that Will Straw was the perfect person to deliver the debate due to his extensive writing on popular culture in areas such as popular music, cinema and urban culture.

Will Straw, who is Professor of Urban Media Studies in the Department of Art History and Communications Studies at McGill University in Montreal then gave his enlightening presentation. This covered how social scenes within films can gather up the social world in time and space, thus offering a better understanding of the rich social texture of life. As was expected, much lively discussion followed.

After the debate champagne was offered to everyone in attendance to celebrate the special occasion. During this networking session Will Straw commented:

– I was pleased with the way people engaged with the Q & A and it’s an honour for me to be here and be the hundredth presenter in this amazing series.

I asked him to share his thoughts on the IIPC debate series, to which he replied:

– I was looking over the list of people who had spoken and it really is amazing, the diversity but also the quality. Top people in so many of the fields. I gather people think a debate has to be a fight or people disagree, but some of them are just explorations. I think keeping open the possibility of debate and sometimes having two people rather than one and mixing it up, It’s a very impressive series. Not many speaker series that I know of go to a hundred, so bravo.

Indeed, and may this ‘amazing’ debate series continue.

Here’s to the next one hundred… Kippis!

Steven Jones is a doctoral candidate in the Department of Musicology.