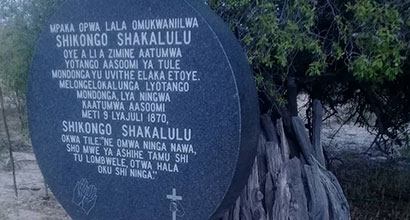 Omandongo: The Forsaken Mission Station and a Reminder of the Plights of Pioneering Times

In his memoir of Martti Rautanen, Matti Peltola refers to Omandongo as “the site of the forsaken mission station, and a reminder of the plights of pioneering times”. In describing Omandongo as the site of a forsaken mission station, Peltola is referring to the current absence of church activities at the site, unlike other mission stations, such as Oniipa, Olukonda, Oshigambo, and Nakayale. In any village with links to Christian history, let alone one as important as Omandongo, the key social institution one would expect to see is a church. However, no church is currently present in the case of Omandongo. The only form of religious congregation present in the village is a synagogue, which is locally referred to as oshinagoga. A fully-fledged church is located in Onayena, several kilometers away from Omandongo. Other places in Owambo, where the missionaries lived, have fully-fledged parishes. Hence, Omandongo can be described as a forsaken mission station.

This forsakenness can also be attributed to other factors. For example, the lives of the missionaries were characterized by high mobility that was mostly determined by the location of the local ruler’s palace. The site of the Omukwaniilwa’s palace dictated the location of the capital of the Ondonga Kingdom. Following the history of Rautanen for example, he and his family moved from one place to another, at the request of the presiding Omukwaniilwa. For example, when Omukwaniilwa Shikongo shaKalulu died, Rautanen was moved to Oniipa, which was close to Omukwaniilwa Kambonde kaNankwaya’s palace. He and his family then moved to the palace of Omukwaniilwa Itana Nekwiyu, who lived in the eastern part of Ondonga. After the death of Omukwaniilwa Itana Nekwiyu and the ascension of Omukwaniilwa Kambonde kaMpingana, Rautanen moved to Olukonda. Such was the highly mobile life of the Rautanens, which had direct implications on the development of Omandongo into a fully-fledged mission station on par with others as we see today. Other accounts also link the forsakenness of Omandongo to the negative attitude of Omukwaniilwa Nehale lyaMpingana, who ruled the eastern part of Ondonga, while Kambonde kaMpingana ruled the western part.

The reference to Omandongo being a reminder of the plights of pioneering times is reflected in the tragedies that faced missionaries at the station. These include the death of Rautanen’s son, Heinrich, in 1880, as well as the death of Liisa Roiha, the wife of the catechist Yrjö Roiha, who died of malaria in 1886. Both are buried at Omandongo. These circumstances are vividly described by Peltola.

Visible Legacies of the Finnish Missionaries at Omandongo

Despite the forsakenness of Omandongo, some remnants are visible. One of the most easily recognizable remnants of the legacy of the Finnish missionaries is the statue of Rautanen, who is depicted with a Bible in his hands. This is a new monument, erected in April 2019. This new statue joins the long-existing cross that represented the arrival, the work and presence of Finnish missionaries. 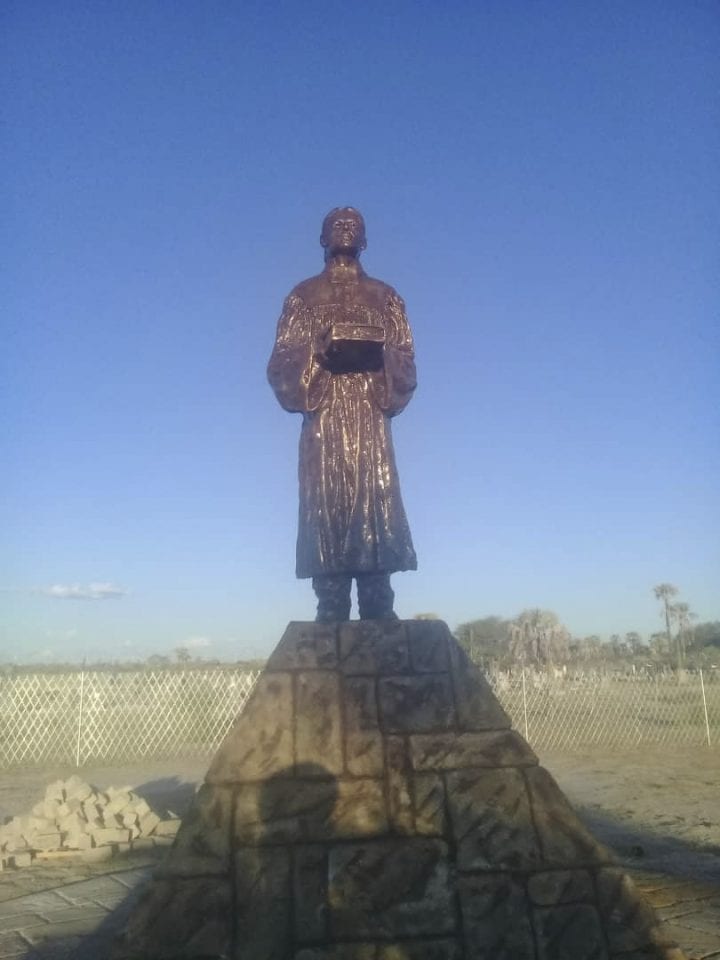 Memorial to Martti Rautanen and the cross at Omandongo. Photograph: Helena Manase (2019). 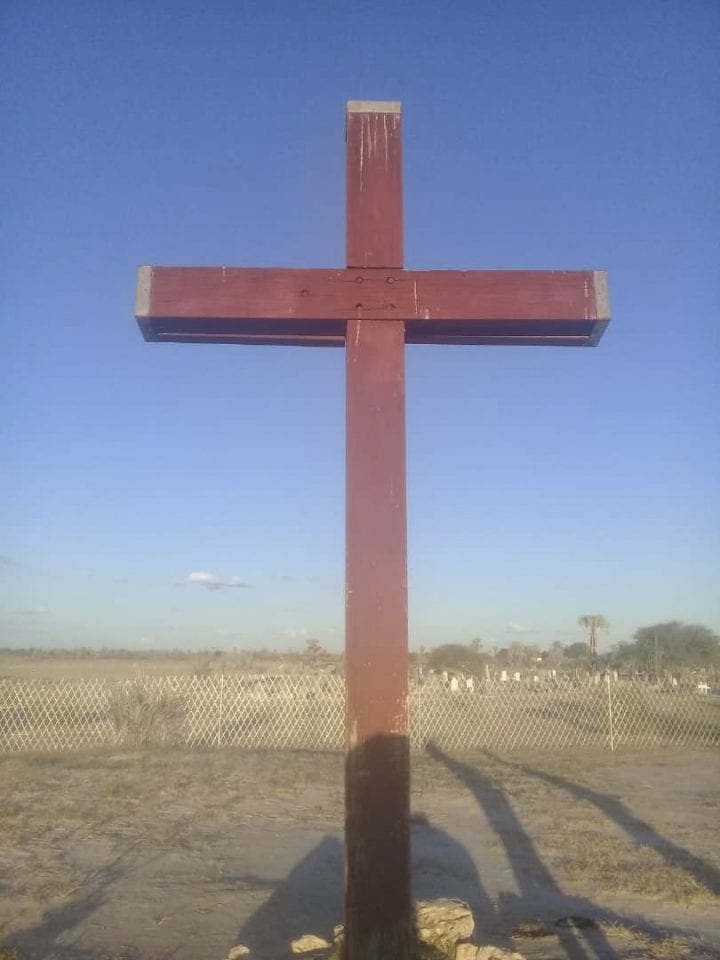 Cross that represented the arrival of the Finnish Missionaries. Photograph: Helena Manase (2019).

The Nakambale Primary School is another site that honors Rautanen’s legacy. The school is named after the Finnish missionary. Another physical remnant of the Finnish missionaries is the memorial to Omukwaniilwa Shikongo shaKalulu, which was erected in 1985. According to Namuhuja, the memorial was initiated by the late Omukwaniilwa Immanuel Elifas Kauluma (1975–2019), together with his omalenga (senior headmen). The leading authorities in Ondonga (omalenga and ooyene yomikunda, village headmen), alongside the Ondonga people contributed to the cost of the memorial. The primary aim of constructing this memorial was to honor Omukwaniilwa Shikongo shaKalulu and his role in enabling Finnish missionaries to spread Christianity in Ondonga. This is evident on the inscription engraved on the memorial, which reads:

Here lies Omukwaniilwa Shikongo shaKalulu. He accepted Finnish missionaries in his kingdom to spread the good gospel. In the first sermon conducted by the Finnish missionaries, Shikongo is said to have stated that: “You did well to come here. All that you will tell us, we want to do it.” 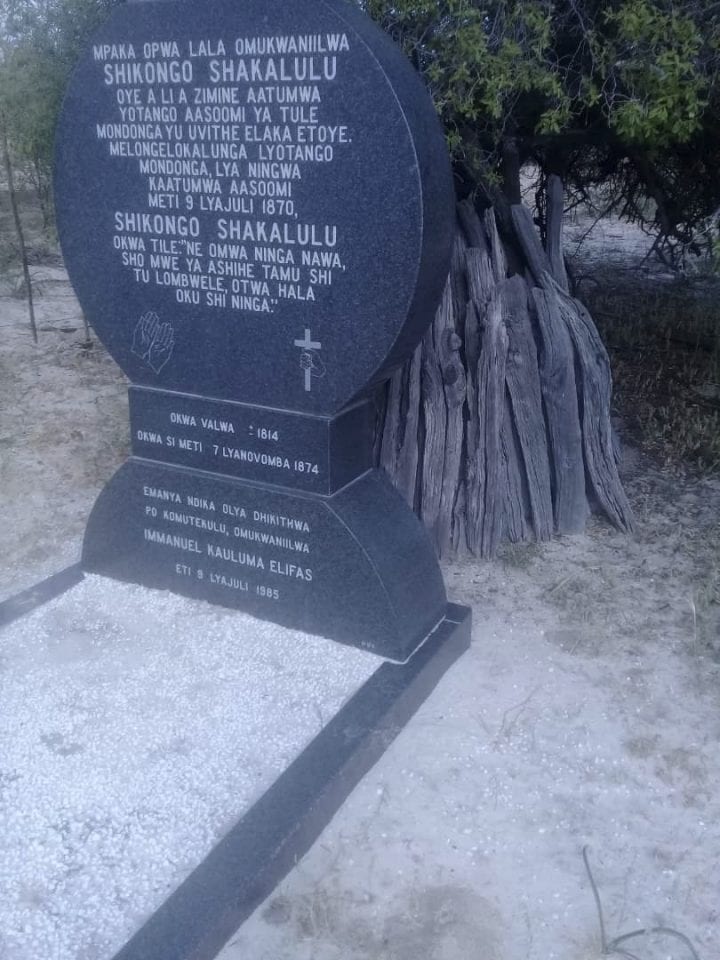 Irrespective of the absence of a parish, Omandongo remains historically important in terms of the spread of Christianity in Ondonga, and Owambo in general. The arrival of the Finnish missionaries was of great significance for Omandongo; a significance which people in the area continue to identify with today. They derive pride from this historical event. Any history of the work of missionaries in Owambo is not complete without a description of the role of the aakwaniilwa, for they have shaped and reshaped missionary work.

Peltola M., Nakambale: The Life of Dr. Martin Rautanen. The Embassy of Finland, 2002.

Romie Vonkie Nghitevelekwa is Lecturer in the Department of Sociology, Faculty of Humanities and Social Sciences at the University of Namibia. She has studied Social and Cultural Anthropology at the University of Freiburg in Germany. Her field of expertise is in land reform, land tenure and security of tenure with a particular focus on communal areas.