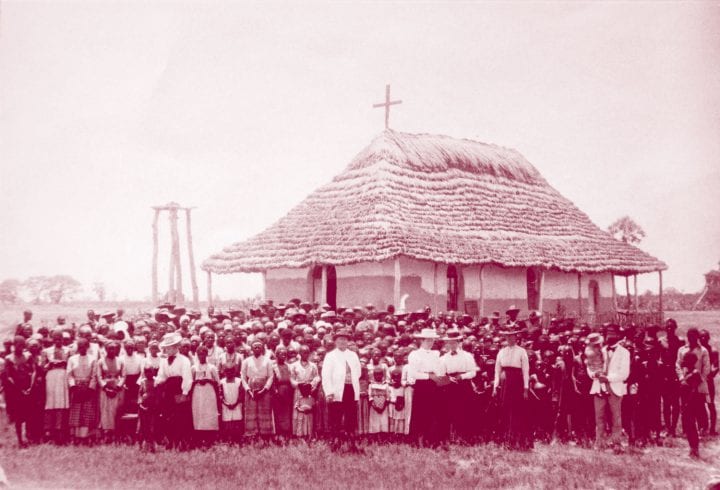 Carl Hugo Hahn (1818–1895) was a pioneering missionary in today’s Namibia. Born in 1818 near Riga, Hahn was the son of a Baltic-German landowner. He attended the Missionary Seminary of the Rhenish Missionary Society in Barmen. He was subsequently ordained and in 1841 he was sent to South Africa. In Cape Town he married Emma Sarah Hone, a young English missionary. After an apprenticeship in Windhoek, Hahn became the founder of the Herero Mission. The main station of Otjimbingue, founded in 1849, was 100 miles from Walvis Bay.

Hahn visited Europe in the 1850s and 1860s, including St. Petersburg and Helsinki and gave lectures on missionary work. At this time he met the director of Finnish Missionary Society, which had been founded in 1859. Back in Africa, he visited Owambo and encouraged Finns to send their missionaries to this region. The first ten missionaries, among whom were Martti Rautanen, arrived in Walvis Bay in February 1869. They received their practical missionary training in Otjimbingue, at Hahn’s mission station. Rautanen became a boarder in the household of Hanna Kleinschmidt, the widow of the missionary Heinrich Kleinschmidt. The young Finn fell in love with Hanna´s daughter, the 15-year-old Frieda. Three years later they were married by Hahn.

The missionaries arrived in Owambo on July 9, 1870. Hahn was their superintendent, but not for long. After some personal and doctrinal controversies with the Mission Board, he left the Rhenish Missionary society in 1873 and worked thererafter as the pastor of the Lutheran church in Cape Town. He died in the South African city on November 24, 1895.

A comprehensive collection of Hahn’s papers is kept in the Cape Archives. The most interesting part is his diary from 1837–1860. This document has been published, as well as a collection of letters written by his wife Emma. These papers contain many dispatches from the missionaries of the Rhenish Missionary Society to their former principal in South African town Paarl, but also about eighty letters from Finnish missionaries and the Mission Board in Helsinki. There are thirty letters from Rautanen during the last years of Hahn’s life, from 1888 onwards.

It is no wonder that Rautanen wrote to Hahn, his former teacher and supervisor, who was now a retired senior missionary. They had much in common. They were both subjects of the Russian Empire, and had grown up in the Lutheran German milieu of the Baltic provinces. Rautanen was born in 1845 in the province of Ingria near St. Petersburg. His native language was Finnish, but he used German in Owambo, as this was the language of his wife. Their children were also given German names. Rautanen wrote his extensive diaries (now housed in the National Archives of Finland) in German. He was employed by the Finnish Missionary Society, but he did not feel comfortable in Helsinki. During his first furlough in Finland in 1891 he wrote: “The children miss Ondonga. I should rather like to return home today or tomorrow, because we take Ondonga to be our homeland.” Even his wife Frieda wrote to Hahn: “Everything here is so unfamiliar and strange.” For the first time in her life she was in Europe, and she could not speak either Finnish or Swedish. Winter was coming, and they longed for the warm African summer.

Like Hahn, Rautanen had problems with his own board in Helsinki. Yet both men acquired a leading position in the mission field. Rautanen recalls how Hahn had complained twenty years earlier in Otjimbingue that the young brothers did not understand him. Now he himself was the senior missionary in the field, who was trying to encourage the newcomers, the young brothers. He wrote: “You are the only person, who understands our situation as it is in reality, and you are the only one who has compassion for us.” The board back in Helsinki had no real knowledge of the situation in Owambo.

Hahn and Rautanen also shared scholarly interests. Both were autodidact linguists, ethnographers and natural scientists. Both were also honorary doctors, although Rautanen would not receive his degree from the University of Helsinki until his eightieth birthday. Rautanen tells in his letters about his Oshindonga-German dictionary, about the the proverbs he had collected and his ethnographic collections, which are today located in museums in Europe and South Africa. After twenty years in Owambo he had acquired a profound knowledge of the country and could answer the questions of the ever-curious Hahn concerning the area’s geography, history and languages. In one letter he gives a detailed description of the history of the Aawambo tribes. He collected sayings and folklore, but he also translated the New Testament and, eventually, almost all of the Bible.

He describes how he invented new words:

I managed to create two important words, i.e. Omunakalunga, that is, who is with God, also godfearing, and Omukenakonashanakalunga, i. e. one who has nothing to do with God, being ungodly. These I have naturally created with the help of native Christians, and so must you if you are going to do honest work and want to get the message right and be sure that the words are not improper. The word Omukenakonashanakalunga is a somewhat long word but it is better than nothing or an alternative that does not say what it ought to say.

The correspondence between Rautanen and Hahn constitutes neither reports to the Mission Board nor to missionary friends in Finland. Rather, they are confidential letters addressed to a fatherly figure. Grand Old Man of the South West Africa Mission.

One of the main themes in the letters is the relations between the mission field and Mission Board. In almost every letter Rautanen criticizes the plans of the board. Mostly he adds that he is only lightening his heart: “Now enough of the complaints”, or “What is the use of complaining? I just had to lighten my heart.” The board consisted of elderly gentlemen of high social status: professors, civil servants, clergymen and rich merchants, whereas the missionaries were young men of humble origin (Rautanen´s father was a serf) without education other than what they had received from the missionary seminary. The first academic theologian did not arrive at the Finnish mission field until 1906.

Communication between the board and mission field was slow, and the missionaries had to make their decisions in casu, that is, they could not wait for instructions from Helsinki. During the tenureship of Carl Gustaf Tötterman, who was director of the board between 1877–1895, the relationship between the headquarters in Helsinki and the front line in Owambo was particularly strained: “Our brothers in Owambo” are mentioned in records of the board as if they were an additional and expensive nuisance, with whom the society could very well do without.

In his letters Rautanen blames the gentlemen (Die Herren) of the board for not only producing an incompetent mission strategy, but also for underestimating the entire gamut of the work. According to Rautanen, they were of the opinion that anyone will do for Africa, however ignorant and incompetent:

What kind of results can you expect in that case? Especially I wonder how the honorable fathers, despite knowing who these people are, are determined to send them here. To work with these kind of men is much more difficult than to be quite alone. You cannot find in Finland a theologian who would like to go to the mission field. Theologians accordingly have no interest in missions. That is why our work is in such a miserable condition. The gentlemen in the board think that only peasants and artisans are good enough to become missionaries and they themselves are too good.

The church in Olukonda, which was Rautanen’s mission station, was ready in 1889, but they had no church bell and no harmonium. Rautanen commented:

I should not be ashamed of begging for money for the church bell from mission friends, but our board did not give its consent. This is a jolly society (eine heitere Gesellschaft). We do have a bell, but it is not worth its name. The good mission friend who gave it to us thought that it is good enough for the heathens. When are we going to see the Lord in the pagans and not black creatures? Many – at least our – mission friends tell us to love the heathens and throw them the rubbish. The missonaries are employed out of mercy, and a few extra pennies are enough for the heathens.

Rautanen was also annoyed by the censorship practised by the board. He had not only written to the Finnish missionary magazine, but also to another Christian periodical: “This article is no doubt going to be thrown away,” he tells Hahn. He had been informed that the mission director had told the editor of the periodical not to publish anything that would cause offence among friends of the mission:

Dear uncle, what do you think he means by ‘offence’? Nothing else but telling how our real circumstances are here. We ought to give a favorable picture and not to show the shadows. When we are writing about our congregations, we must present their members as ideal Christians and not as they are, and we are not allowed to tell of the problems in our work. The Bible is praised because it presents the holy men as they are. Why should we in our work for the kingdom of God be treacherous and do everything in the twilight? I don’t know how matters are in other missionary societies, but ours is acting dishonestly, and the dishonesty brings the work of our society to ruins.

Martti Rautanen stayed in Owambo until his death in 1926 and served under five different missionary directors. The fourth, Joos. Mustakallio, was the first to visit the mission field in 1900. After this the relations between the missionaries in Owambo and the board in Helsinki gradually improved.

Weiss, H., “They did not want us to be here”: Finnish missionary activity in Northern Namibia and its first setback, 18691872. Working Paper 1/99. Institute of Development Studies, University of Helsinki, 1999.

Simo Heininen is Professor Emeritus of Church History at the University of Helsinki. He is an expert on the Finnish Reformation and is the author of several books, including A History of the Finnish Church (with Markku Heikkilä in 2016) and Mikael Agricola – hans liv och verk (2017).