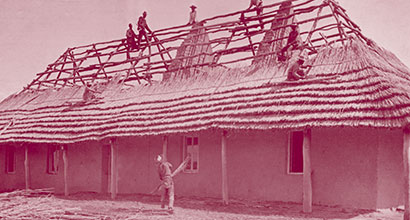 Literary data concerning the history of the Finnish Mission in north-central Namibia from the late nineteenth century has been widely studied. Given the vastness of this field of research, this article focuses on the impact of Finnish architectural designs as embedded in structures built by the Finnish missionaries. North-central Namibia’s former Finnish mission stations are characterized by a proliferation of buildings with thatched overhanging roofs supported by tree trunks/poles. These are buildings of particular historical interest as they are a lasting reminder of Finnish’s presence in northern Namibia. This article analyzes this Finnish mission’s form of representation, in terms of the building designs and the type of materials used to make them. This is because many buildings, if not all, were made in the same style and shape. Although they are some of the oldest buildings in the area, many still exist. This article examines whether these designs were originally Finnish or if they were appropriated from local Aawambo building styles. 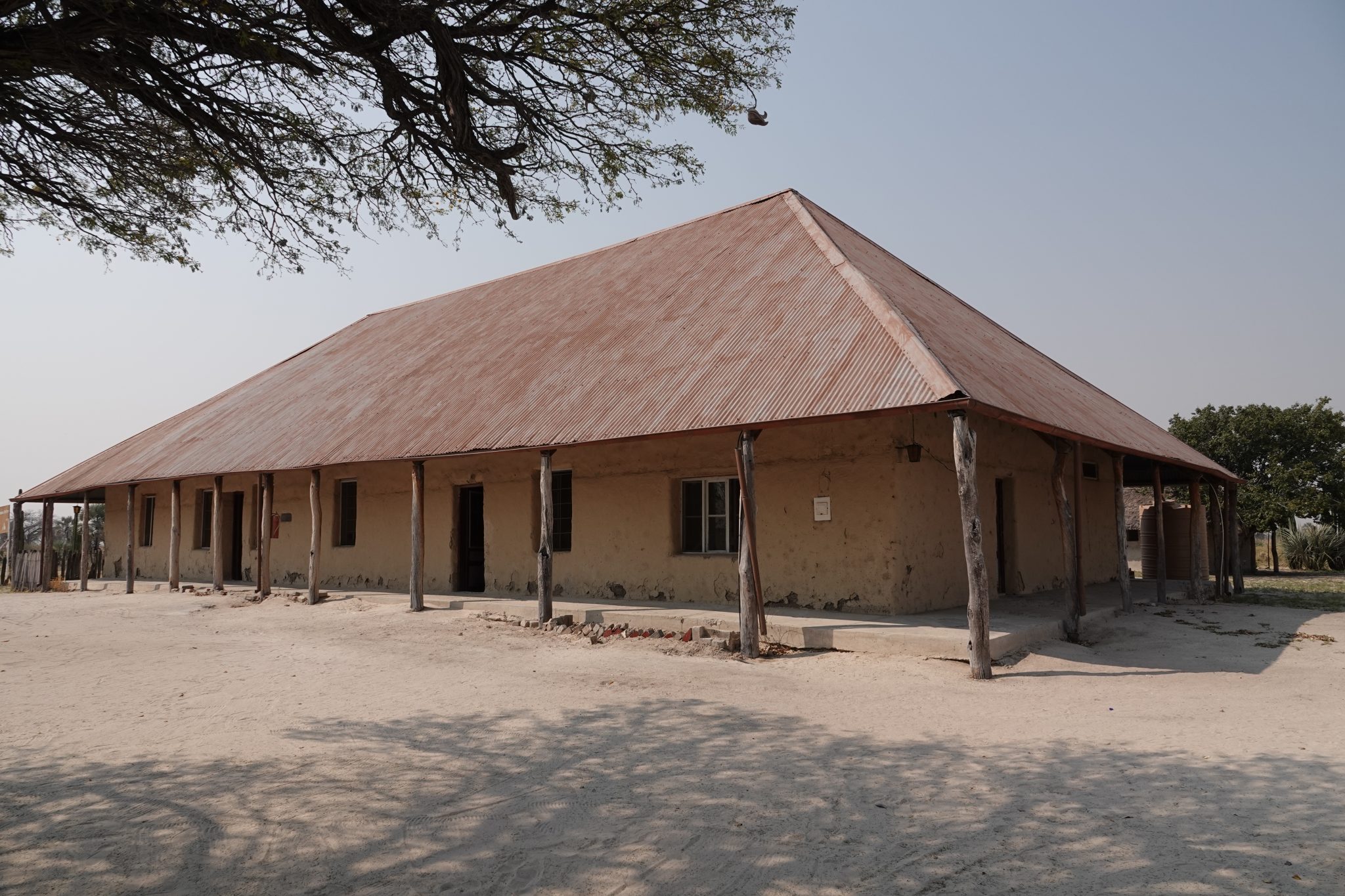 Martti Rautanen built a new mission house in 1893 with the parishioners at Olukonda. Photograph: Marjo Kaartinen (2018).

Like other aspects of Owambo culture, the architecture of Owambo is special. Africans have generally developed their own local architectural traditions and a common theme in traditional African architecture is the circular structures that made up their homesteads. This was also the case in Owambo. The traditional homestead in Owambo was generally composed of cattle kraals, several sleeping huts and other huts used for pounding millet, storing food and household utensils, etc. The different sections within the homestead were separated from each other by a wooden palisade or a millet-stalk fence. The outer circular wooden palisade around the whole homestead protected it from invaders. The Aawambo use a wide range of materials, including thatch, wood, mud, mud brick, cow dung, to make their homes.

Aawambo architecture has been influenced by western designs since their contact with long-distance traders, explorers and later missionaries. Prior to western contact, the Aawambo lived according to their traditional lifestyle. However, in the late nineteenth century, European influence arrived in the area and became an important source of inspiration for many local. The arrival of the first Finnish missionaries in Owambo in 1870, not only replaced traditional religious ideas with Christian values and a western orientation, but it also created new forms of building. Minna Saarelma-Maunumaa points to colonialism as another important factor, which spread the European mode of life to the Owambo communities through the migrant labor system, and this continued under the South African regime (1915–1990). Hence, the influence of the settlers of German, British and Afrikaner origin, who had Aawambo employees working in their households, farms, mines, etc., rubbed off on them. Therefore, one can argue that the adoption of Christianity, together with the spread of European cultural patterns, has led to radical changes in Owambo lifestyle, including building styles.

Questions about the link between existing Finnish mission stations built by the Finnish missionaries in north-central Namibia, and understanding Owambo building patterns that take into account issues of style and design, have a significant bearing on the history of architecture in Finland.

Finnish Building Heritage and its Influence on Owambo Architecture

As an essentially forested region, timber has been the natural building material used in Finland as it has always been available and it is easy to work. Finnish construction heritage is largely a tradition of timber construction, whereby logs are laid horizontally in succession and notched at the ends to form secure joints. This is seen in the extant architecture from the Finnish missions in Owambo. The origins of the technique are uncertain. Although it was used by the Romans in northern Europe in the first century BC, other possible older sources are said to be areas of present-day Russia. Crucial in the development of the mission stations in Owambo, the Finnish missionaries adapted a similar building type, which comprised a rectangular plan that was clearly influenced by the architecture of their homeland. According to Kim Groop, the first church building in Owambo was inaugurated at Olukonda on 29 September, 1889. The church building was 17 meters long and 7 meters wide. It was built from sundried bricks, with a thatched grass roof and an earthen floor. Rautanen also built a new mission house in 1893 together with the parishioners at Olukonda. The house was built in the same style as the church. 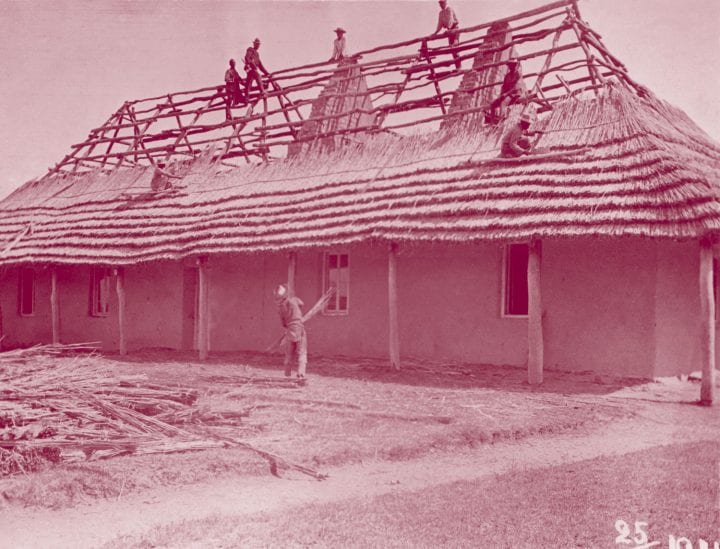 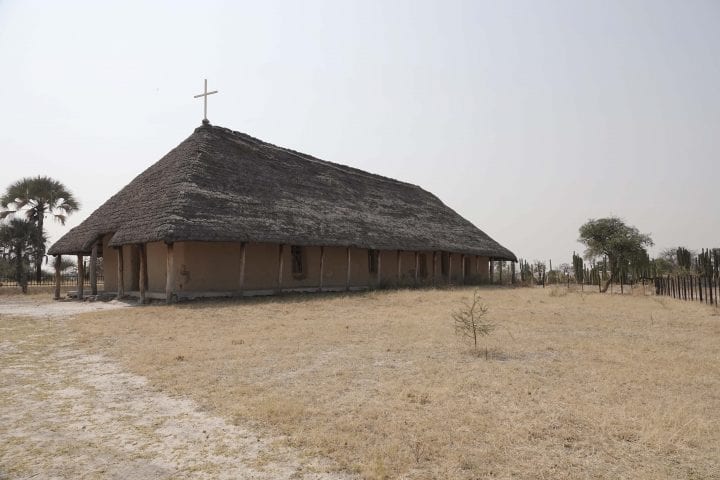 The church building at Olukonda was inaugurated in 1889. Photograph: Marjo Kaartinen (2018).

Many Finnish Mission buildings were constructed of sundried abobe clay bricks. The larger buildings had a veranda, which followed the entire length of the house with an overhanging roof giving shadow to the veranda as well as the interiors. The roofs, which were often thatched, were supported by tree trunks and provided shelter. Although a number of changes to local architecture are indeed present, these largely include elements of both African and European origin. This notion is supported by Catharina Nord, who claims that these buildings were a hybrid of local architecture and western building types. The use of local materials and architectural forms, which were applied by the missionaries, clearly shows that the materials used remained of local origin.

This is particularly interesting because in seeking to document the historical origins of Owambo’s indigenous architecture, one is referred to the local term for “traditional” square-plan structures – ombaalaka (from the English “barrack” or Portuguese “barracão”) – that were inevitably attributed to a European cultural presence. More often than not these square buildings are largely believed to be the product of missionary influence. The square-plan structure of an ombaalaka was especially built to serve as a place of gathering within a homestead. This has direct influence on Aawambo homestead architecture, and, more particularly, the homesteads of the emerging elites (nurses and teachers) whose lives were influenced by the missionaries. Buildings within homesteads were referred to locally as ongulu (sing.) and were constructed in the same format as ombaalaka, often with a corridor and two doors; one facing east and the other west.

In the case of specialized areas of construction, such as roof carpentry, brickwork and brickmaking, the effects of missionary influence remain evident in Owambo up to the present day. This paper strives to reflect on the ways in which aesthetics and building technology of these Finnish mission stations may represent the identity of a place, a people, or an era. There is a need to connect this to Owambo’s cultural landscape and its many forms of intangible cultural heritage, especially through oral traditions that give different perspectives. For example Rev. Julius Mtuleni agreed that buildings found at Finnish mission stations were inspired by architecture in Finland at the time. He further states that although the missionaries were not trained architects, they had knowledge in building, and they managed to construct good structures. Additionally, they were seen as unique since all rooms (in the building) had two doors. Rev. Mtuleni attributed this pattern of building to the fact that the missionaries were coming from a war background (Russian occupation in Finland). The two doors allowed for an easy escape from the house if there were any attacks. Magdalena Kaanante claims that the roof was built from timber beams (probably Mopani or camel thorn) covered with sticks or millet stalks, and capped with a layer of clay. This way of building was seen in most, if not all, Finnish buildings. These types of roofs were so strong that one could walk around on them. Consequently these were the same roofs used to hide SWAPO PLAN fighters from South African forces during the war.

Further research is needed that should not only focus on the information obtained locally, but also from mission archives in Finland to support the significance of Finnish influence on Owambo communities. Despite the obvious element of influence and transposition between Aawambo and Finns, some Owambo architecture retained its traditional circular homestead form, and materials have remained local. However, with the advancement of new technologies in design and building materials some old structures have been replaced. Most importantly, the missionary input appears to have had a direct effect upon the nature and form of indigenous building patterns. We believe that researching the work of missionaries in Owambo provides a tremendous opportunity, and should not be viewed in isolation from the activities of that time, especially since the current discourse on Finnish influence remains firmly grounded in the precepts of modernism, and not necessarily on the significance of alterations in material culture and local practices.

Heikkilä, J., Learning from the past – designing timber multi-story apartment buildings on the basis of the timber construction heritage. Department of Architecture, University of Oulu (n. d.).

Romie Vonkie Nghitevelekwa is Lecturer in the Department of Sociology, Faculty of Humanities and Social Sciences at the University of Namibia. She has studied Social and Cultural Anthropology at the University of Freiburg in Germany. Her field of expertise is in land reform, land tenure and security of tenure with a particular focus on communal areas.