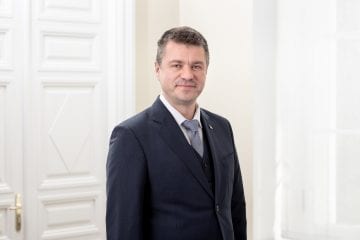 In June 2020 Estonia will host the fifth Three Seas Initiative Summit in Tallinn, bringing together Heads of States and business communities from twelve member countries located between the Baltic, Adriatic and the Black Sea – Estonia, Latvia, Lithuania, Poland, Czech Republic, Slovakia, Austria, Hungary, Slovenia, Croatia, Bulgaria and Romania; as well as representatives from partner countries, the United States of America, Germany and the European Commission.

As Europe and the world around it changes, the Three Seas Initiative was born out of a practical need to boost connectivity and economic cooperation on the north-south axis of the European Union. When looking at the map of the European Union in terms of infrastructure – roads, railways, airway connections, but also energy grids and telecommunication networks –, it’s a dense web in the west but looks significantly sparser when you move to the Central and Eastern Europe. This disparity is not a question of mere inconvenience but one of economic competitiveness. When it comes to energy markets, it’s also a question of geopolitical vulnerability. Completing that web of infrastructure connections is both the goal and challenge for the Three Seas Initiative – better infrastructure connections means stronger economies and a more cohesive and resilient European Union.

The first Presidential Summit of the Three Seas Initiative was held in Dubrovnik in 2016. Since then the summits have occurred annually and each summit has added substance to the initial idea. The Warsaw Summit in 2017, with the participation of President Trump, highlighted the strong support of the United States of America.  This is a hugely important new aspect in the transatlantic bond, and we cannot underestimate the value of such a partnership with the US in drawing investments and business interest in building up our regional infrastructure and energy security.

In 2018 in Bucharest the member states agreed on a list of Priority Interconnection Projects, to map the needs of the region in transportation, energy and telecommunication sectors. Bucharest also saw the first Three Seas’ business forum aiming to facilitate direct contacts between business representatives of the region, and introducing new investment opportunities. A project progress review was introduced by Slovenia at Ljubljana Summit in 2019. So far, many of the projects prioritized by the Thee Seas Initiative have been developed and financed largely by the European Union. Maintaining the EU support to the Initiative remains a precondition in working towards the Initiative’s goals.

Estonia is happy to take on the hosting of the fifth Three Seas Initiative Summit, together with the third Three Seas’ business forum in June 2020. Our goal will be to consolidate and build on the impetus that the past summits have created. When we asked ourselves what focus Estonia can give to the Three Seas Initiative, the choice fell logically to our experience and know-how in digitalization and building up digital society. Estonia truly believes that digital ties between countries – the digital single market, standardization and data sharing between countries across various platforms – are just as important, if not more so, in the future as conventional connections of infrastructure. Digital solutions that save time and money will be at the heart of every future cross-border connection.

The next step in the Three Seas Initiative now is to move on with the implementation of infrastructure projects, to turn regional willingness into action. To this purpose the Three Seas Initiative Investment Fund was established this year in Luxembourg by Poland’s Bank Gospodarstwa Krajowego and EximBank Romania, with the aim to engage, on a commercial basis, in Three Seas’ regional infrastructure projects. The fund is now open for all Three Seas countries, partner states and institutional investors, such as European Investment Bank and European Bank for Reconstruction and Development, to join. As the host of the next summit, Estonia will also concentrate its efforts on facilitating the development of the Fund further, so that first concrete projects in the region could be implemented as soon as possible.

We welcome all involved countries in Estonia next summer to work on 3 Seas Initiative for stronger and more connected Europe.