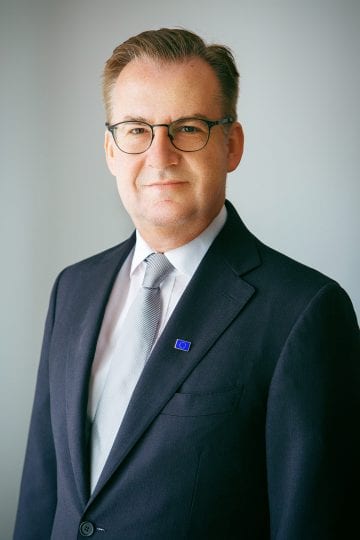 Dirk Schuebel,
Ambassador,
Head of the EU Delegation to Belarus

The prospects for EU-Belarus relations looked reasonably good when I took office as Head of the EU Delegation to Belarus in early September 2019. I presented my letter of credentials to President Lukashenko already four days after my arrival. At that time, both sides were engaged in an overall open-minded dialogue, while the EU never ignored the dire situation on the human rights front.

This opening was triggered by the release of the by then last political prisoners in August 2015. The Presidential elections in that year, while far away from being free, fair and democratic, were not accompanied by any violence by the authorities against peaceful demonstrators.

Consequently, the EU lifted most of its sanctions in place, agreed, in the absence of a bilateral agreement between the EU and Belarus, to launch talks on legally non-binding Partnership Priorities, and set up a regular discussion forum called EU-Belarus Coordination Group. Several sectoral dialogues were relaunched. It equally provided active assistance to Belarus’ WTO membership application, doubled its bilateral financial assistance to about 30 million Euros per year and opened EIB and EBRD operations to the Belarusian public sector.

The 9 August 2020 Presidential elections and its aftermath put an end to the EU policy of critical engagement. It is not that the EU had not expected any difficulties in these elections but no one could foresee that they would become a turning point in Belarus’ short independent history.

The EU was very pro-active: In the run up to the elections, on our initiative, a joint statement by the local EU-US-UK missions was issued in early June outlining what the west would expect from the authorities before, during and after the elections. Unfortunately, our demands were not followed up by the authorities. On the contrary, potential and actual candidates for President were harassed, arrested based on made up allegations or forced to leave the country. OSCE/ ODIHR was unable to observe the elections, since no timely invitation was issued to them by the authorities. Half a dozen statements by different levels of EU officials up to President followed to make the authorities aware that the EU closely followed the events.

On Election Day, when the official result of 80% for the incumbent President was published, it became obvious that the elections had been massively falsified. Independent vote counting saw Tikhanovskaya clearly in the lead, with a possible absolute majority of votes, and with Lukashenko trailing behind. Again, the EU reacted with an immediate clear statement by HRVP Borrell condemning the falsifications and outlining it would not recognise the official result of the elections.

However, the worst was still to follow: When many thousand Belarusians took to the streets to protest against the falsifications on election night and the days after, they were met with unprecedented violence by law enforcers; thousands were arrested and hundreds tortured.

Following these dramatic developments, the events in Belarus were discussed at both extraordinary meetings of the EU Foreign Affairs Council and of the European Council in the middle of August. Both Councils condemned the actions by the Belarusian authorities, reiterated that the elections would not be recognised by the EU, demanded an immediate end to the violence against peaceful protesters and the release without delay of all political prisoners as well as the launching of a national dialogue with civil society including the newly established Coordination Council. Given that the violence continued by the authorities, in particular at the by now regular impressive Sunday demonstrations, a first package of sanctions was adopted in September and a second one, which includes Lukashenko, followed in October. 59 officials are on the list by now.

It should be noted, while the EU obviously always hopes that those officials under sanctions will change their behaviour, sanctions are not a means in itself. Sanctions are in the first place for the EU the most adequate means to demonstrate strong disagreement with the actions of certain political players.

What is next? Already at the August informal Gymnich meeting of the EU Foreign Ministers, the Ministers tasked the relevant EU services to carry out a stocktaking exercise of and to revise EU-Belarus relations. By the time of writing, the internal discussions are still ongoing but it can be safely assumed that in the absence of a clear improvement of the human rights situation in the country relations will be considerably downgraded, including on financial cooperation.

However, the EU is also working on an alternative scenario, in case serious democratic reforms will come to fruition in Belarus. The EU will no doubt stand ready to provide considerable political and financial support for such reforms to be a success.

This article reflects the personal views of the author and not of the institution he represents.