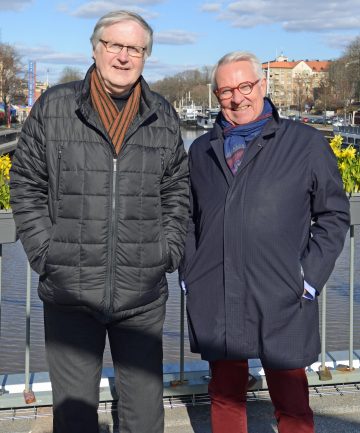 The Baltic Sea is one of the world’s largest brackish water areas. Its salty water is from the North Sea, from edge of the Atlantic, whence water is irregularly pushed into the Baltic Sea through the straits of Denmark. The freshwater that dilutes the saltiness is mostly humidity condensed into rain, that too mainly from the Atlantic, that is driven into the sea by rivers. Approximately 250 rivers run about 500 km3 of fresh water into The Baltic Sea each year. Many marine biologists call the Baltic Sea a large estuary or a shallow bay of the ocean. The relatively small-sized and little-watered Baltic Sea differs significantly from both salty oceans and freshwater lakes. It is a low-salt brackish water pool, a young sea within a tectonic plate depression, that has received the majority of its current biota only after the last ice age so within the last ten thousand plus years.

As part of the Baltic Sea, the Archipelago Sea forms a globally unique biosphere. The Archipelago Sea’s 2,000-million-year-old bedrock, 41,000 named islands, Finland’s highest biodiversity and changing seasons make it a natural entity unlike anything else in the world. The Archipelago Sea is Finland’s most important natural equity. It is a weaving of naturescapes and landscape tradition brought about by centuries of human influence; of island clusters, broad open water, shallows and trenches. Seals lie on cliffs polished by millions of years of erosion. Across meadows, broadened by grazing, seas of flowers sprawl, colourful flocks of butterflies flutter and animals scuttle. The Archipelago Sea is paradise for boaters, cottagers and travellers alike. In addition to islanders, ferries transport summer dwellers and visitors. Furthermore, the unique Archipelago Sea is a world-class travel route, where modern passenger ships transport over 5 million passengers between Finland and Sweden each year.

The Archipelago Sea is ill, and it must be saved for future generations

People have had a strong influence on the archipelago and its nature since the islands began rising from the sea after the latest ice age. Seal hunters and fishermen came first. Little by little habitation spread, villages were born. Wood collection kept the scenery open, livestock gnawed down meadows and pastures. Once the archipelago became deserted one island at a time, open landscapes began to grow shut. Gradually, almost unnoticed, human impact changed its nature. The force of sewage from growing cities, industry emissions and the wash of nutrients from agriculture extended to marine nature. Almost invisibly, but even more drastically.

Although the majority of emission sources have been tamed, the influence of agriculture upholds a high level of nutrients in the water. In addition, nutrients and heavy metals stratified in sediments may also be released into rotation from time to time. Climate change further increases problems. The Baltic Sea – and the Archipelago Sea as part of it – is ill. The blooming of blue-green algae in the midsummer is the most visible part of the problem, something nevertheless the entire ecosystem of the sea is suffering from. The future health of the sea is in our hands.

In March 2019, the Finnish Ministry of Environment launched a programme to increase the protection of Finnish waters. Based on this, on March 11, 2019, 20 million euros were assigned to the purification of the waters of the Archipelago Sea for the next three years. The government has granted water protection a nationally significant investment – all in all, the funding allocated for this cause during the government budget session was 45 million euros for 2019–2021. This program complements other water protection funding, such as EU funding, which is significant for agricultural water protection among other causes. These funds have been allocated for agricultural water protection, locally for example for reconditioning lakes and developing water control in cities. The Minister of the Environment for Finland’s last government, Kimmo Tiilikainen believes that with the help of this water protection enhancement programme, significant strides can be made to the condition of our waters in the coming years

While our government’s investment is substantial it is not sufficient. The Centrum Balticum Foundation and its Protection Fund for the Archipelago Sea have decided to launch the Unique Archipelago Sea communication operation to influence action. The operation aims to increase knowledge about and respect for the Archipelago Sea internationally, especially within the Baltic Sea region. We invite all individuals, companies and communities to join us in our five-year endeavour, Operation Archipelago Sea, which aims to give future generations a respected and clean, globally unique nature and travel destination.