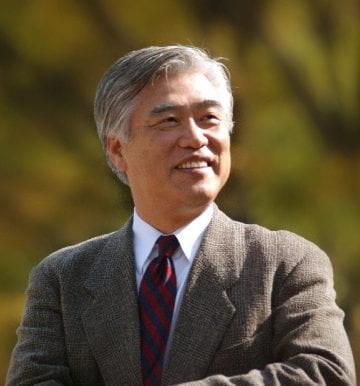 There was MVIP, Master Vision and Implementation Plan made for Korea‘s development and it was conceived in 1969. Today, I going to take you my 50 years “Back to the Future” to introduce this PLAN simply to show how it functioned Korea to develop so miraculously.

Dreaming started right after the Korean War of 1950-1953, my elder brother and I had been thinking what to do for our destroyed and poorest country. It became our dream. In 1962, I had an opportunity to see President Kennedy at the White House as a youth delegate of V.I.S.T.A., Visit of International Students to America. His inaugural speech rang around my ear: “Ask not what country can do for you, but what you can do for your country.” It was simply reinforcing echo to my family’s determination.

In 1964 another opportunity came unexpectedly. I was invited to speak at the American National Red Cross Annual Convention in Manhattan Hilton Hotel which just opened. After the speech, a young high school student audience called Debbie came to the stage took me to New York World’s Fair site in Brooklyn by subway. At that spot, I made up firmly my young mind, “Someday I will host the World’s Fair in Korea.” I also realized Tokyo was hosting Olympic Games in that same year, I said to myself, “Why not in Seoul someday.”

1. MVIP and a Masterly Stroke of Grand Axis of Developing Korea and Visioning

With all these consecutive inspiring experiences, I coined a new word ‘insperience.’ With personal insperience, I had pursued necessary learning by meandering through my tailored curricula and disciplines.

As I was graduating from MIT in 1969, I gained relevant episteme; knowing what I knew. I was happy to conceive MVIP to satisfy my own expectation: one masterly stroke brushed throughout the Korean Peninsula connecting 5 cities. And for the 5 cities, I decided to deliberately vitalize.

The line connects Jian, Pyongyang, Seoul, Daejeon and Yeosu: Jian was capital in Koguryo’s time thousand years ago; Pyongyang is the Capital of North Korea; Daejeon is in the middle of South Korea and Yeosu is in the Southern Coastal Region with archipelago like Turku.

With the five city nodes drawn on the Grand Axis of Deliberate Vitalization, I had assigned Olympic Games to Seoul, Expo to Daejeon city and another major global event to Yeosu city. Yeosu, although small city ended up hosting both Expo in 2012 and WCO Silk Road Mayors Forum 2013! The city has become most visited city in Korea today over 10 million a year.

I had conceived the three main themes to guide the South Korea efforts to be long-ranged and comprehensively purposeful. They are shown in the following map and diagram. 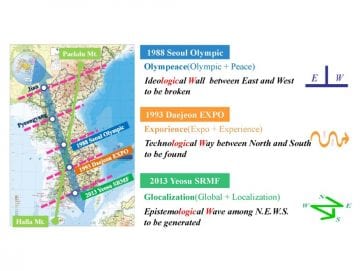 2. Implementation Strategy for the Vision Realization over the past 50 years 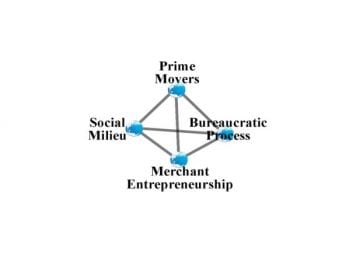 The topic to cover the past 50 years of implementation history is overwhelming. I can only introduce you a tetrahedral policy analysis model which I employed for synergy dynamic for Korea’s development.

Thinking together with the Prime Movers model and Bureaucratic Process model, I had persuaded successfully all the previous 8 Presidents of the Republic. They were rather easy to persuade and receive administrative support, partly because my elder brother was well known and respected for his academic excellence and decent leadership. It was also possible, because I was successfully stayed out of every partisan government position. I was asked two times to become Minister of Construction and one time Prime Minister. One does not get mired in the zero sum game like political partisanship.

Social Milieu model was already functioning pervasively in Korea. There was ‘Ppali Ppali’ can-do spirited milieu was there. This generation worked on Monday, Tuesday, Wednesday, Thursday, Friday, Friday and Friday. Especially, Koreans were eager to work for the ‘Ppali Ppali’ development of their country. Korean women also very uniquely contributed. They went all the way and sacrificed their lives for their children’s education.

Entreneursip model which I had applied was uniquely Korean. I had many personal meetings with most of the chairmen of Jaebul, Korean style of business conglomerate and I had to “keynergize” them with frontier entrepreneurship, and they were always shown new mega business  projects. Korean Jaebul groups like Samsung, Hyundai, LG, Korean Air, Lotte, Shindongah, Buyoung Housing etc., were all suggested and engaged to construct mega infrastructures and supra structures.

As I am writing for BRE Review, I warmly remember my Baltic Rim friends who had given me practical assistance for the Implementation. As an example of KTX, I had to receive assistance from Pierre Henin of Alstom. I took TGV from Gare d’Lyon, Paris to Lyon. Dr. Antonio Belcastro of Atlas Copco arranged meetings to see TBM at work in Stockholm and Helsinki. I still remember visiting an attractive underground Church downtown Helsinki. As Korea is mountainous country and high speed needs many tunnels, so I had to introduce TBM.

3. Impact and Consequences in Korea Today

Don’t be surprised to learn where Korea is today: and in 2019, Korea is no.5 or 6 in terms of total amount of export and import. In terms of GNP ranking, it is between 10th and 12th. Korea was no.150th-160th country in 1969. Last year, Trump visited in Korean National Assembly and spoke about his surprise to learn that Korea is a rich country. Naturally many people say that it is a miracle.

It is a history now, and Berlin Wall was broken in 1989, right after 1988 Seoul Olympic Games with the very theme of the Ideological Wall between East and West to be Broken. 2018 Pyungchang Winter Olympic was hosted and North and South Korea tension was thawed. Korean conglomerates and Korean technology groups are topping many areas, while cultural fields have excelled as well. The Academy Award 2019 was chosen Korean movie “Parasite,” for the first time outside of America, and BTS, Korean Singing group is now rated globally the top of Bill Board Chart.

However, there was no miracle. It is Korean people’s hard work. I hope that MVIP dreamt in 1969 and personal dedication helped. I remember 1969 was historical year. Humanity successfully landed on the Moon as promised by America’s late President Kennedy.

Today Korea has plenty of troubles all over and we could not avoid the environmental deterioration, tawdry housing blocks, and socio-economic injustice problems. Most alarming matter is the highest suicidal rate among the OECD countries, and partisan politics are dividing the country. Democracy is waning while prime movers have been only interested in their own legacy while economic Jaebul group were only interested in amassing money, while intellectuals are not acting beyond their functional roles.

Material mattered but now mind matters! We have to learn how to live together. We have to unlearn prejudices and arrogance. We, citizens beyond borders, mind to help evolve Global Village Civilization to be more harmonious, just and sustainable!