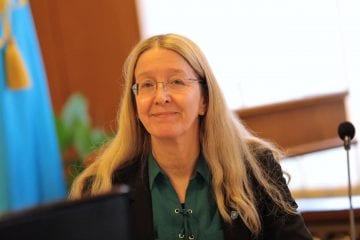 Imagine being forced to leave your home and all you could take was one suitcase. What would you take? Nearly two million Ukrainians were forced to make this decision since Russia occupied Crimea and invaded Eastern Ukraine in 2014. Your medical records, medicines, trusted physicians and clinics were all left behind. Finding new medical care in new communities was difficult, as healthcare financing was based on residency registration. Absorbing their healthcare needs  created a substantial burden on the already underfunded Ukrainian medical system. So, you let your hypertension go untreated, as you cannot afford to pay for your medication. Then a stroke leaves you paralyzed on your left side, and you are no longer able to work.

Imagine you have just become a parent, and your newborn is about to get her first vaccinations.  You go online and see posts about the vaccines.  You are horrified to see that vaccines are “experiments on children”, that they “kill more people than the disease they prevent”, and that “vaccines in Ukraine are dangerous and ineffective”.  Because of this disinformation, you doubt the need for immunization and leave the hospital without vaccinating your newborn out of fear.

Several years later, your child goes to preschool. Unvaccinated, she enters the classroom, now daily exposed to 25 other children.  You receive a text message from the school: a kid in your child’s class has the measles.  Soon, your child develops a rash, a fever and begins to cough.  Your child is hospitalized, put on a ventilator and nearly dies from pneumonia.

Or, say you have lived your entire life in Ukraine’s Crimea.  You are an HIV positive intravenous narcotics addict, who has been receiving anti-retroviral (ART) and opioid substitution therapy (OST)  from the Global Fund through Ukraine’s healthcare system.  In 2014, Russia invades Crimea.  You are forced to obtain a Russian passport to receive medical care.  You have no choice as you may die without the therapy. Then you discover that OST is unavailable in Russian controlled areas, and that the Global Fund has been banned from supplying ART in Crimea. So, you buy a few hits of heroin, inject a large dose into your vein, and die from an overdose.

These are the realities of life in Ukraine since Russia invaded Crimea and parts of Eastern Ukraine. Russia’s hybrid war against Ukraine is often described in terms of military, information, energy, and economic effects. However, Russia is also attacking Ukraine on a more basic level, undermining its most valuable asset- its human capital. By limiting  the access to evidence based, modern healthcare services, something that is a given in modern civilized societies, Russia is threatening to throw Ukraine, and the global community, into a New Dark Age..

The transformation of Ukraine’s healthcare system since 2016, with the creation of the National Health Service of Ukraine, a single payer universal health coverage provider, guarantees all Ukrainians access to healthcare.  They are now free to choose their primary care physician, no longer tied to their residency registration, and over 28.5 million have done so in a little over a year.  The guaranteed service package and the pharmaceutical reimbursement program have allowed patients with chronic illnesses, such as hypertension, to receive uninterrupted care. And transforming medical facilities from government owned and run institutions to publicly owned non-profit corporations has created competition. Patients are now sought after rather than being deterred from obtaining care due to lack of funding.

A 2018 investigation into vaccination disinformation campaigns in social media looked at 1.7 million tweets from 2014 to 2017 and found that Russian trolls had a significant impact online by coming down on both sides of the issue, creating controversy and hype (American Journal of Public Health, October 2018). In 2019, the WHO put forward its five year strategic plan, naming the biggest threats to global health, including “vaccine hesitancy,” fueled by “weaponized health communication.”

Since 2016, the measles vaccination rate has grown from 44.5% to 91% in Ukraine.  Procurement of vaccines through UNICEF, assuring free vaccination, and targeted communication campaigns had a positive effect.  However, due to the low vaccination rate over the last decade and lack of efficacy of vaccines procured from Russian owned manufacturers in the past, Ukraine suffered a measles outbreak: since 2017, over 115,000 cases were reported with 41 deaths. Ukraine still has a low vaccination rate for other vaccine-preventable diseases such as diphtheria and Hepatitis B. More work needs to be done, including holding Russia accountable for disinformation and manipulation of the subject, while Russia boasts near-perfect vaccination rates.

Russian occupied Crimea and sections of Donbas were inaccessible for most humanitarian organizations since the start of Russia’s war against Ukraine. Failure to access care has resulted in at least 40 deaths of former OST participants. In 2017, Ukraine became the first country in Eastern European and Central Asian regions to provide OST from the state budget. Over 12,000 Ukrainians benefit from the service. Harm reduction programs such as syringe and needle exchange, condom distribution, free HIV testing at primary care clinics, pre-exposure prophylaxis are all available and financed through Ukraine’s state budget. Ukraine is the first country to initiate and implement a Global Fund transition plan to take over full financing for the HIV programs through the state budget. These advances have helped almost 200,000 HIV positive patients in Ukraine in the last few years, but they have not reached the estimated 50,000 people living with HIV in Russian occupied territories.

Ukraine has made great strides in creating a fair and equitable universal healthcare system for its citizens, while facing the challenges brought on by Russia’s hybrid war against Ukraine.  The Russian invasion of Afghanistan in 1979 drove Afghan society into the dark ages. Now, Russia is doing that on a global scale, targeting established and evidence based medical practices using the weapons of drama and entertainment wrapped in disinformation coupled with military invasion. To begin solving this global issue, we need to start calling things by their real names. Russia is a state sponsor of terrorism, whose real aim is to usher in a new Global Dark Age.