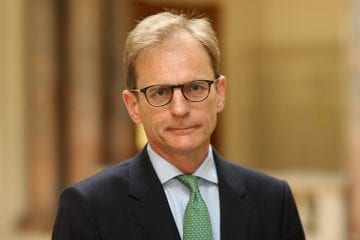 Tom Dodd,
Her Majesty’s Ambassador to the Republic of Finland

The people of the United Kingdom of Great Britain and Northern Ireland voted in 2016 to leave the European Union. The UK left on 31st December 2019, and entered a period of Transition; EU rules apply to the UK until 31st December 2020. As I write, negotiations continue between the UK Government and the EU Commission, representing the 27 Member States, on the Future UK/EU Relationship. Both are committed to seeking a negotiated outcome.

The UK’s EU exit process has been a major issue in European politics in the last decade. The UK always had a distanced relationship with European integration. The UK chose not to sign the Treaty of Rome at inception. Membership in 1973 under a Conservative Government was secured with a very narrow Parliamentary majority with resistance not just from the Opposition, but also amongst Conservative MPs. The 1975 referendum confirmed UK membership of a Common Market. The subsequent struggles of the Maastricht Treaty, establishing the EU, in the UK Parliament in the 1990s were illustrative. As a Member State the UK, like others, opted out of a range of European initiatives – Schengen, other JHA measures and the Euro.

Such ambivalence drew on much longer history. In the Middle Ages, the British Isles were tied to the continent by trade, politics and religion, but an island location away from the heart of the continent dictated a particular social development. The emergence of the common law was a major cultural and psychological step which forever differentiated from the book legal tradition, and helped the very early adoption of concepts of legal rights. With the reformation, England and Scotland were two of the few Protestant states. Capitalism drew both into increasing levels of trade beyond Europe, cemented by the creation of Great Britain in 1707, and the establishment of Empire. The free market basis of the industrial revolution led the UK in a wholly different social and political direction in the 18th and early 19th centuries: not least the evolution of institutions independent of Kings, the concept of a sovereign, representative Parliament, a variety of close global relationships, and a deep commitment to free trade.

Britain’s distinctive history is well known, but worth reiterating to help explain the approach of the UK Government to its European neighbours. The importance placed by PM Johnson on respect for UK legal sovereignty and the rights of the UK Parliament have long origins. Similarly, the concept of free trade between states based on mutual recognition has deep roots. Finland and the Nordics in terms of culture, religion and geography have similarities with the UK’s European experience. Their peoples and governments have reached different, and perfectly valid, interpretations of where their national interest lie, in this case within the EU/EEA. But the EU itself houses different mansions, both in terms of variable geometry of institutions, and differing economic and social perspectives. It remains the case that Finland and the Nordics/Baltics have closer views to the UK on many issues than they do to other EU Members.

It is also clear that what unites Europe is greater than what divides. European national institutions, societies and businesses operate from a common basis. The UK remains geographically part of Europe. Whatever the politics of UK/EU negotiations and the outcomes, the key challenges of the 21st century: health, economic and climate, and the increasing threats posed by autocratic powers can best be addressed in collaboration between nations. The UK Government is firmly committed to such co-operation and to European security, especially via membership of NATO and the maintenance of a broad spectrum of defence capabilities funded by defence spending of 2% of GDP. The UK Government, in concert with Italy, will host the COP Conference in Glasgow in November 2021. This is not quite the last chance saloon for the planet, but certainly the next, best opportunity to address the mitigation of climate change with real impact.

The EU is only 25 years old. Modern European integration barely dates 60 years. The distinctiveness of the UK’s European relationships is based on its own past, but cannot hide the essential role that UK has played within Europe in the last three centuries. The UK has always been a key partner in business and innovation for the continent.  The UK has been the inspiration for many in terms of the development of rights, laws and policy. The UK was the balancing power in 18th and 19th century security, and later the key European state in countering militarism and totalitarianism in the 20th.  As we approach a new structure governing relations between the UK and EU, relations as Europeans remain vital. What sets us in common is much more important than what set us apart. I hope that we can seize the opportunities.