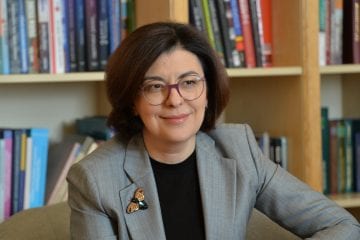 Oksana Syroyid,
Co-Chair of Lviv Security Forum and Leader of Samopomich Union Party,
Ex-Vice Speaker of the Parliament of Ukraine

We enjoy our lives in time of change of balance in the world. In modern times it is not only tanks or missiles, but also the words of media that change the borders, kill people, destroy houses and undermine human dignity.

The most important geopolitical battles is taking place on Ukrainian territory and for control of Ukraine. Understanding the nature of this battle and its impartial coverage can save Europe and, probably the World from the new World War as well as save the millions of lives.

Nowadays Russia is dissatisfied with its role on the world stage and doesn’t hide their desire to reshape the world security order in their favor. Its not the first time when Russia is using war in order  to increase their influence in the world. Every time during its aggressive expansion, Russia views the territory of Ukraine as a source of resources and a buffer security zone.

Since the creation of the Moscow Kingdom, the main human resources, agricultural lands and infrastructure has been located along the western border of the Moscowia. In addition, the Moscow didn’t have access to warm ports. This determined the main strategy for Russian westward expansion from time of Moscovia to modern times – to provide access to the Baltic and Black seas and to increase the buffer zone around important infrastructure and resources.

The defeat of the Russian Empire in the World War I and the October revolution in 1917 by no means changed the imperial policy of the Bolshevik Russia. On the contrary, immediately after the rise of the Soviet state in 1917 Russia began the occupation of newly formed Ukrainian Peoples Republic. During the Paris Peace Conference in Versailles in 1919-20, the leaders of three countries – the United States, Great Britain and France – distributed statehood to peoples, who came out of the wreckage of the European empires. However, they didn’t grant the recognition of the Ukrainian state which was under Russian attack. The Western countries were exhausted by the First World War and didn’t have strength and desire to confront the Bolsheviks Russia whose intentions were unclear to them. They decided to isolate and ignore the Bolsheviks.

The conquest of Ukraine and access to its resources opened new opportunities for the Russia Bolshevik Empire. The most valuable was the grain that could be exported in exchange for industrialization of the Soviet Union. The appropriation of  grain from the household farmers (kulaks) was a difficult process, but collectivization needed modern equipment. German industrialists were ready to supply technologies in exchange for supplies, the most important of which was Ukrainian grain. Germany was the first country who broke the international isolation of the Bolshevik dictatorship and to recognize Bolshevik Russia and all its conquests.

In order to  eradicate the peasant rebellions during collectivization and guarantee the control over land and grain- the soviet main currency in world’s trade – Stalin killed millions of Ukrainian peasants by famine in 1932 – 1933 (Holodomor). While people in Ukraine were dying  out of hunger, the world was silent so as not to spoil relations with the Soviet Union. Even countries like the UK and the USA were buying grain from the soviets. The Soviet Empire, which was in isolation for decades, returned to world’s arena as a ‘’new market’’ and a great trading partner.

Stalin intended to move to the West to establish control over the seas and increase the “sanitary zone” under the banner of the socialist revolution. Hitler, on the other side, needed  Ukrainian land and human resources for building  his own future empire. Ukraine, or to be more precise – its land, remained the main trophy in the war between the two dictators. Therefore, people were not sorry. About 40% of all human losses of the Soviet Union in the Second World War constitute Ukrainians.

Athrough, the Second World’s War was resolved by both of dictators, only Hitler was ever punished. Stalin ended the war as a winner who dictated conditions. As a result, the Soviet empire in 1945 pushed its borders to Berlin, establishing the German Democratic Republic (another proxie “ORDLO”). Stalin intended to move further west.

Despite unsuccessful attempts at further expansion to the west, the Soviet empire achieved the cherished dream of all Russian tsars. The control over the Baltic Sea was guaranteed by the Kaliningrad enclave – the remnant of the Kingdom of Prussia with the capital in Königsberg, as well as occupation of Poland, Latvia, Lithuania, Estonia and the GDR. The Black Sea was under control due to control over Crimea and the Ukrainian coastline, which was guarantied throuth Russian occupation of Georgia, as well as establishing  socialist satellite states -Bulgaria and Romania. The sanitary zone was expanded enough to keep the empire’s “line of life” safe.

The democratic world correctly assessed the aim and methods of the Soviet threat. It was mistaken only in the nature of this threat – for decades of the Cold War, the West regarded communism itself, not the imperial nature of Russia, as a threat. That is why the Western world in the second half of the eighties became interested in the idea of democratization of the USSR, and later of Russia and considering it as a partner and, forgetting history. That is why Russia has, over the past two decades, been able to penetrate almost unnoticed in key democratic processes in the West throughelection interference, media control, political party funding, participation in hydrocarbon production and transportation.

That is why, unfortunately, Russian aggression against Ukraine was inevitable. Russian President Vladimir Putin has not accidentally called the collapse of the Soviet Union “the greatest geopolitical catastrophe of the twentieth century.” Without control over the Baltic and Black Seas as well as without control over Ukrainian resources, “Greatest Russia” is impossible. The revolution of dignity in Ukraine was only a pretext for the Russian invasion. The major objective of the illegal annexation of Crimea is to gain control over the Black Sea and to increase geopolitical leverage in the greater Mediterranean region. In the same way, the major reasons for the occupation of the Eastern Ukraine is obtaining leverage over Ukraine in persuading Russian interest both in internal and foreign policy of Ukraine.

Understanding the nature of the conflict shapes the reflections on it. The historical context defines the words that are used to describe the reality. There is no “conflict in Ukraine”, there is “Russian aggression”, “Russian military intervention”. There are no “militants”, there are “Russian armed forces invading Ukrainian sovereign territory” and “Russian proxies”. There is no “civil war”, there is “Russian-Ukrainian war”. And the words create the world because the words you use design the things you believe.