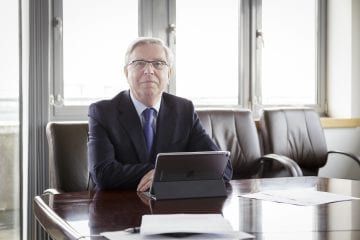 The EU Trans-European Transport Network (TEN-T) policy is a vital backbone of Europe’s economic performance, present and future. Over the years, TEN-T policy has been steadily growing into a genuine European project that increasingly is guiding public and private investments. It aims to achieve long-term benefits for society and economy such as accessibility, connectivity and competitiveness of States and regions as well facilitating sustainable economic growth and development within the internal market and between it and the wider world.

The TEN-T network consists of a dual-layer structure. The comprehensive network represents the basic layer and includes all transport modes – rail, road, inland waterway, air and maritime as well as their connecting nodes and corresponding traffic information and management systems. The core network represents the strategically most important nodes and links of the trans-European transport system focusing on key long distance transport flows and the need, in particular, to enhance and develop vital cross- border links within the Union. There is a strong connection between the “two pillars” of TEN-T policy – network policy and planning, as  enshrined in the TEN-T Regulation, and infrastructure finance from national, private and EU sources. This combination is yielding success and is the product of a deep collaborative association between project promoters, the EU and member states. There is a rich level of association of stakeholders with the management and delivery of TEN-T policy which undoubtedly is a large factor in its success. In the ongoing EU financial perspective 2014-2020 the rate and speed of conversion of money “on paper” into real transport projects on the ground has been unprecedented.

Scandinavia is embedded in the TEN-T network. Denmark, Finland, Norway and Sweden are part of the Scandinavian Mediterranean core network corridor. Having regard to their peripherality, large size and relatively low density population spread there are particular challenges in connecting Scandinavia to core continental EU markets. Transport to and from Scandinavia heavily depends on ferries and a number of fixed links whose future evolution needs to take account of the significant projected increases in transport demand linked to national, regional and corporate growth plans and ambitions across this vast region. Together with the member states the EU has been co-investing in this wider macro-regional transport infrastructure and plans to continue to do so, especially as regards critical cross-border connections. The Oresund fixed link for example has been a major success, transforming the Copenhagen/Malmö region and bringing people and businesses in Sweden and Denmark closer together. It is expected that the planned Fehmarnbelt fixed link will have a similar future impact on the wider macro-region stretching over time from Hamburg, through Copenhagen, to Stockholm and Oslo. Further fixed links may be needed if transport demand increases in line with some of the ambitious regional predictions.

The focus of TEN-T policy is now also shifting northwards. The EU has proposed to extend the Scandinavian-Mediterranean corridor along the Bothnian Gulf in Sweden to Oulu in Finland and to add a branch to Narvik in Norway. Furthermore, it is proposed, in an overlapping arc, to extend the North-Sea-Baltic corridor on the Finnish side as far as Lulea in Sweden. This aims to offer better transport solutions for residents in these sparsely populated northern regions of Finland, Sweden and Norway and to better facilitate bulk freight transport flows from there to their markets. Forestry and mining activities in the region are expected to increase. Many of these raw materials are vital for Europe’s transition to a net zero carbon future. The region is also anticipating increased freight flows from China by rail and/or by ship via the increasingly ice free Northeast Passage, itself a consequence of the effects of global warming. These developments necessitate not only strengthened and reliable transport corridors throughout Europe to assure the smooth and sustainable flow of goods North-South but also the evolution of a common regional strategy setting out the priorities for transport infrastructure development between the four Scandinavian states themselves.

The general transport system is undergoing a fundamental transformation – driven by decarbonisation, digitalisation, automation, intelligent systems, infrastructure and new mobility services. All this will call for stronger cooperation between Member States and a wide range of other actors, public and private. Efficient transport corridors can act as a testbed and catalyst in this regard. Scandinavia with its innovative capacity, climate change mitigation strategies and commitment to balanced regional and social development is particularly well placed to become a forerunner in this new transport and mobility future, setting the pace and paving the way for others to follow.