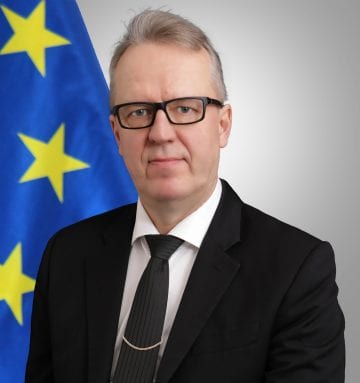 Ukraine is a country with phenomenal potential. As anyone with any experience of Ukraine will know, the country has a wealth of well-educated, hardworking people, a proud industrial heritage and some of the most fertile land on the planet. By rights, it should be a rich country with a steady flow of international business visitors, whose only worry is which one of the many lucrative opportunities on offer they should invest their money in.

Sadly however, the experience of international investors and domestic entrepreneurs in Ukraine has not always been worry free.

The worries that businesses have faced are closely linked to weaknesses in the rule of law. After all, who apart from the most risk-tolerant would start a business if there was a fear that the investment might be raided by corrupt officials or their backers? This was one of reasons that law enforcement and rule of law reform was considered a priority by the Ukrainian authorities following the Maidan events, and why the EU was invited at the time to set up an advisory mission focusing on civilian security sector reform – the EU Advisory Mission (EUAM) Ukraine, which I head.

Ukraine has undeniably made significant progress in strengthening the rule of law in the past five years. Indeed, the former President of the European Commission Jean Claude Juncker complimented Ukraine last year for achieving more in terms of reform since Maidan, than in the previous quarter century. But significant weaknesses remain. If the new government’s ambitions to make Ukraine a leading investment destination are to be realised, reform of law enforcement and rule of law institutions will need to be sped up, particularly in the following institutions: the Security Service of Ukraine (SSU), the prosecution services and the judiciary.

There is no domestic intelligence service in Europe or North America, which enjoys the SSU’s wide-ranging powers. With over 30,000 employees (compared to under 5,000 at Britain’s MI5), the SSU’s competences include the power to investigate economic crime. Allegations that businesses are being approached by SSU officers for hefty bribes have dogged the organisation for a long time, while credible journalistic investigations have revealed some SSU officers living in mansions and driving cars worth multiple times their official salary.

I should stress that many SSU officers are discharging their duties to protect their country against Russian aggression with undoubted heroism. Unfortunately however, it looks like some bad apples within the organisation undermine the patriotism and commitment of their more principled colleagues. Ukraine’s new government has made a commitment to root and branch reform of the SSU, and this is to be commended.

At EUAM, we are working closely with the EU Delegation to Ukraine, the NATO Liaison Office to Ukraine, and the US Embassy to Ukraine to support a reformed SSU. We are advocating for its activities to be subject to oversight by the Ukrainian Parliament and for the majority of investigative functions to be handed to other agencies. This will allow the SSU to concentrate on core domestic intelligence functions such as counterintelligence, counterterrorism and protection of state secrets. This structure is widespread in democracies and if adopted would strengthen the rule of law as well as security in Ukraine.

Equally important is reform of the prosecution service. Few would have expected that the names of past General Prosecutors of Ukraine would ever feature so prominently in international news bulletins. The sudden recognisability of names such as Viktor Shokin or Yuri Lutsenko as a result of the impeachment hearings in the US gives a good indication however of the outsized importance that the top prosecutor holds in Ukraine. The position of General Prosecutor in the Soviet period and the years that followed was a hugely political appointment, and the incumbent’s powers were frequently used to pursue political enemies rather than in the interests of justice. If Ukraine’s new Prosecutor General, Ruslan Riaboshapka, manages to introduce a culture of political impartiality into his organisation, he will go down as a historic figure for his country.

The last rule of law institution in need of major change is the judiciary. The judicial system is one of the least trusted bodies in the country, with a recent survey conducted by the Razumkov Centre demonstrating that only 15% of Ukrainians trust their judges. A lack of trust in the judiciary acts as a major brake on Ukraine’s economic development.

There is no reason why Ukraine should not be a rich country. For this to become a reality, Ukraine will need a domestic intelligence agency, prosecution system and judiciary that have no other activities than those proscribed by law. Until then, international friends of Ukraine, of which I’m proud to call myself one, will be doing everything in their power to support those Ukrainians trying to make this happen.