Many different thinking skills can be practiced through thinking games.

It’s often possible to make even small changes to the rules of traditional games so that they no longer depend on chance or luck, but rather on using strategies and on thinking creatively. The games below, and more, are described in these webpages and you can see what kinds of thinking skills they help to develop when altered.

The actual subject matter used in these games could be anything and could easily be used to practise / test / revise any topic being dealt with at school.

While playing these games thinking skills and working skills can also be discussed and evaluated using the clouds and wall sentences.

These games can only start to develop thinking skills if they are played in a particular way, and the game facilitator plays an important role here.

NOTES FOR THE TEACHER ON PLAYING THINKING GAMES

Pair work: pupils have to learn to cooperative constructively with each other in pair work. This can be practiced separately and pupils can be reminded of the importance of good pair work before it starts – pair work is working together, not just side by side. Working skills connected to pair work can be found in the ACTS wall sentences. The aims and advantages of pair work can also be made visible on the classroom wall like this, for example:

Practise listening well to each other

Allow your partner to talk

Investigate / Inspire each other!

Think – pair – share: this works well for many types of discussion. It allows time for thinking and lets everyone participate. It has the following steps:-

Materials: words, pictures, objects.  For example, a certain number (4 – 5) of jobs, vehicles, fruits etc. Content from different school subjects could be used for this game, thereby also testing knowledge of the subject.

Which is the odd man out and why?

Take one item at a time and explain why it is the odd man out. 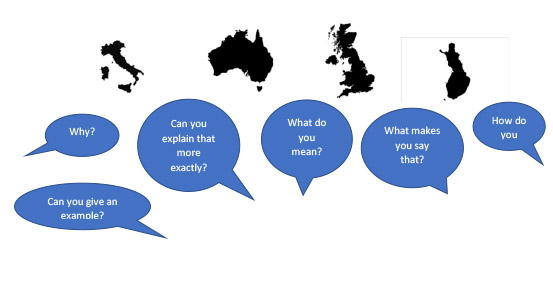 Odd Man Out is a good opportunity to practice asking follow-up questions after hearing the reasons given. Both the teacher and the pupils can ask these.

These questions are important when we want to check that the reasoning given is clear and well explained. Some of these questions can also lead to fact checking and to further investigation of a subject.

The teacher can use this game to help develop thinking skills by taking the following steps: 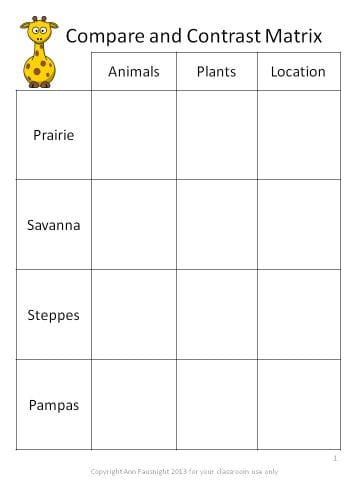 Materials: The magic cards, or pictures, show, for example, animals or adjectives. Cards can be made with words or pictures related to themes in a particular school subject.

With the adjective cards pupils have to think of objects or things which can be described by the adjective on the card. For example, if the card says, ’wooden’, the pupil might say ‘a door’. If the words are then ‘small’ and ‘wooden’, he might say ‘a pencil’, and so on. 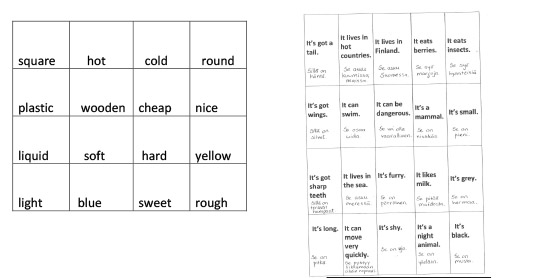 Which would you rather be?

Pupils try to think of as many good reasons as possible. When their discussion is over, they take their cards to the table, lay them face down and take a new card. Then they have the same kind of discussion about the new animal (s) with a new partner. The game continues in this way until the teacher stops it.

When the game is over the whole class can discuss, for example, what animal they would like to be and why. The teacher can ask follow-up questions – why would it be better to be bigger / stronger? / What makes you say that? / How do you know that? / Would this always be best?

There could also be a discussion about what is and isn’t a good reason and why.

Cards on any subject or theme could be

at the same time as playing. 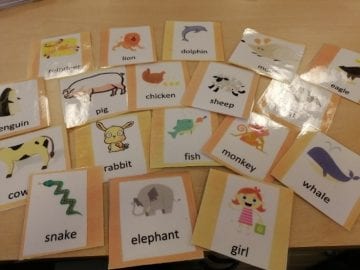 The teacher makes two parallel lines on the floor with tape – they should be about 1 -2meters apart.

This can then be continued with new subject matter. The topics can also be related to themes being studied. The themes below are simple, to let the pupils practise reasoning, listening and discussing simple issues and opinions first.

Some suggestions: Which is best?

Ice-cream or chocolate?    Town or country?

Groups can have a competition to see which group can find the most ways of sorting the same pictures (objects, words…) and are also able to explain the thinking behind the sorting. In this way pupils practise sorting (classifying), reasoning, finding similarities and differences between things and noticing different points of view.

The materials used can relate directly to school subject matter.