This research focuses on the role of biotic interactions, especially herbivory, in affecting biodiversity in the littoral environment of the Baltic Sea. Our focus is in evolutionary and environmental community ecology. In the world of global change, warming, desalination, acidification, eutrophication and species invasions are challenging the Baltic Sea. Therefore, understanding ecology of trophic-level interactions has increasing applied importance.

Our research themes include:

Regulation of littoral biodiversity by foundation species and trophic cascades

The most fundamental roles in communities are played by foundation species that impose disproportionate influences on community structure and function. In addition, higher trophic levels may generate influences that cascade to lower trophic levels. We focus on littoral communities of the Baltic Sea associated with the foundation species, the rockweed Fucus vesiculosus, and evaluate the roles of top-down and bottom-up regulation on macroalgal community structure. Loss of foundation species and changes in high-trophic-level species are increasing concerns in all major ecosystems. Our study will contribute to understanding the consequences of these ongoing changes.

Invasive species pose a threat to native ecosystems and a challenge to evolutionary biologists. The threat arises from the invasions becoming more common with the global change, strong biotic interactions among native and introduced species and the consequences of invasions to communities and ecosystems. Invasive predators can be especially effective in imposing selection on the native species as well as generating trophic cascades. The Baltic Sea is a biogeographically young and species-poor ecosystem; it is being colonized by invasive species at an accelerating rate. The challenge is to understand how species invasions reshape the selective environment in native communities.

Climate change affect macrophytes directly by causing changes in abiotic environment and challenging species tolerances and indirectly by imposing changes in the associated community and biotic interactions. In particular, the populations at the distribution range margins are in the front line of such influences. Whether the populations are able persist or whether their distribution ranges retreat and follow the changing favorable conditions depends on their plasticity and adaptive potential. In the Baltic Sea context, a further climate change challenge arises from the increasing temperature pushing distribution ranges northwards while desalination pushes them southwards. 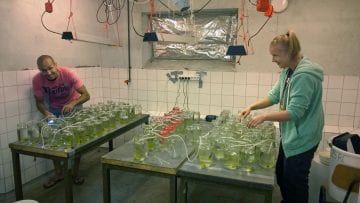