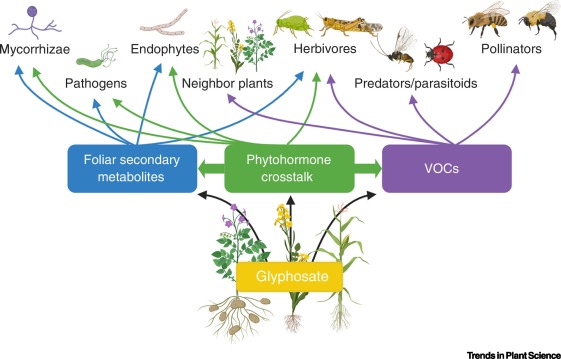 The value of insects in sustainable agricultural practices is increasingly acknowledged, the more we discover the dramatic decline of insect biodiversity in recent years. Global change factors, including the increasing use of agrochemicals have been identified to be the main drivers of declining insect biodiversity in agricultural ecosystems. Each year herbicides are exponentially used and persistent pollution of soils has been recorded across diverse habitats, globally. Glyphosate has become the best-selling herbicide used in agriculture, horticulture, silviculture, and urban environments. It disrupts the shikimate metabolic pathway and thereby blocks the production of aromatic amino acids, which are the basis for several plant metabolites essential in plant-insect interactions.

Schematic Figure (from Fuchs et al. 2021 Trends in Plant Science) indicating the effect of glyphosate in soil on plant metabolite groups and their role for plant interactions with their biotic environment.

With the awarded funding, we will be able to conduct greenhouse and common-garden studies at Ruissalo Botanical Gardens to unravel how glyphosate residues in soil affect plant biochemical processes, which in turn affect organisms interacting with those plants (see Schematic Figure).

In collaboration with researcher from the Czech Academy of Science, we will analyze hormonal changes in plants, which regulate the biosynthesis of multiple specialized metabolites. Those metabolites can range from toxins and deterrents to attracting volatile compounds, which are directing plant-insect interactions in various ways.
One major focus will be to study the dynamics of herbivorous insects in response to glyphosate-mediated changes of plant metabolites. In particular, we will focus on studying the behavior of beneficial insects, such as predatory insects, which are sustainable alternatives to pesticides for pest control.

Furthermore, we will study the behavior of various pollinating insects, such as bumblebees and hoverflies, which fulfill essential ecosystem services by securing pollination across the globe. Many of those beneficial insects rely on volatile organic compounds, which are released by plants. If the emission of plant volatiles changes as a consequence to the effect of glyphosate residues in soil on plant biochemistry, signaling to beneficial insects may be lost and plant-insect mutualisms disrupted.
Together with chemical ecologists from the University of Eastern Finland, we will collect and analyze the volatile profile of various agriculturally important crop plants. Later we will correlate field observations of insect behavior with the pattern in plant-emitted volatiles to unravel which compounds are most affected by glyphosate residues in soil and have the most impact on beneficial insect behavior. 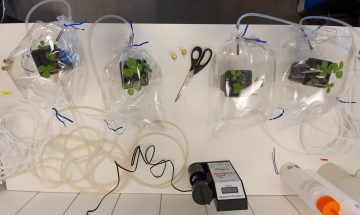 Collection of strawberry plant volatiles in the laboratories of the Ruissalo Botanical Gardens.

Our study will provide pioneering data on how agrochemical residues in soil affect plant properties, which may cause degradation in diverse plant interactions with their biotic environment. Ultimately, we will be able to identify factors, which contribute to insect biodiversity decline, and enable us to steer towards finding sustainable alternatives of agrochemicals.