Our group investigates the physiological roles of PIM kinases and their substrates in the regulation of cell growth, metabolism and motility. We also use the C. elegans nematodes to study evolutionarily conserved signalling pathways controlling e.g. sensory functions, and to biomonitor environmental health hazards.

Previous studies on PIM kinases and their substrates

The studies of our research group have focused on the signalling pathways regulated by the PIM family of serine/threonine-specific protein kinases. We have shown that the three highly homologous members of this family are expressed in partially overlapping patterns, mainly in cells of the immune or the nervous system, but also in epithelia. In hematopoietic cells, pim expression can be induced by multiple cytokines and also by some hormones, suggesting a role for PIM kinases in signal transduction initiated by cytokine or hormone receptors. When overexpressed in lymphoid tissues of transgenic mice, pim genes promote lymphomagenesis, especially in cooperation with other oncogenic genes that either enhance cell proliferation (myc) or cell survival (bcl-2). We and others have observed that in human cancer patients, elevated levels of pim mRNA and protein can be found in hematological malignancies like lymphomas and in solid cancers like prostate cancer, where expression is unregulated upon cancer progression. Moreover, we have shown that pim overexpression confers radioresistance to cells derived from squamous cell carcinomas. 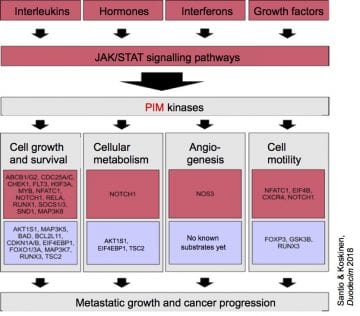 We have demonstrated that PIM kinases stimulate activities of several cellular or viral transcription factors such as MYB, NFATC1, EBNA2, LANA as well as RUNX family members. We have set up the fluorescence resonance energy transfer (FRET), fluorescence recovery after photobleaching (FRAP) and fluorescence-lifetime imaging microscopy (FLIM) techniques to be able to visualize intracellular trafficking and interactions between PIM kinases and their substrates. We have also analysed expression of pim family genes during cytokine-dependent T helper cell differentiation and shown that in hematopoietic cells, PIM kinases promote cytokine-independent survival and inhibit apoptosis by several mechanisms, including upregulated expression of the anti-apoptotic BCL2 protein and phosphorylation-induced inactivation of the pro-apoptotic BAD protein. Altogether, our studies based on domestic or international collaborations have had a major impact to the understanding of PIM kinase activities in both normal and transformed cells.

Studies on regulation of metastatic growth of prostate cancer cells

In the project funded by the Academy of Finland (2015-19), we used mass spectrometry to identify PIM phosphorylation target sites in several putative PIM substrates and then used in vitro mutagenesis, RNA interference, phosphospecific antibodies and PIM inhibitors for in vitro kinase assays as well as cell-based migration and invasion assays to functionally validate the substrates as mediators of PIM effects. Such substrates include the CXCR4 chemokine receptor, the GSK3B kinase, CAPZ actin capping proteins as well as transcription factors FOXP3, NFATC1, NOTCH1 and NOTCH3, the activities of which are up- or downregulated by PIM kinases. Most recently, we have identified the tumor-suppressive kinase LKB1 as a novel PIM substrate, the activity of which is inhibited by phosphorylation.

We have used in vivo xenograft models of human prostate cancer (PCa), where cells are implanted topically onto the chorioallantoic membranes (CAM) of chick embryos or orthotopically into the prostates of nude mice. There we have been able to show that PIM overexpression promotes metastasis of PCa cells from the prostate to the lungs and that one of our PIM inhibitors efficiently blocks the metastatic growth.

We have set up the CRISPR/Cas9-targeted genome editing technique to produce knock-out and knock-in mutants. Thus far we have succesfully produced PCa and breast cancer cells lacking one, two or three PIM family members. We have also continued collaborations with chemists to develop PIM inhibitors, and with clinicians to evaluate the role of PIM kinases in different types of cancer specimens.

In a project funded by the Academy of Finland (2016-19), we demonstrated that the two PIM-related kinases (PRKs) of C. elegans nematodes are true orthologs for the three mammalian PIM kinases and that our PIM inhibitors can also block PRK activity. Therefore, we have set up a facility to culture nematodes for both teaching and research purposes, and have initiated studies on evolutionary conserved signalling pathways with physiological relevance. So far these studies have revealed that PRKs are essential for sensory functions in response to certain olfactory, but not gustatory cues. Next it would be interesting to dissect the molecular mechanisms in more detail and find out, whether PIM kinases regulate olfaction also in humans and other mammals. 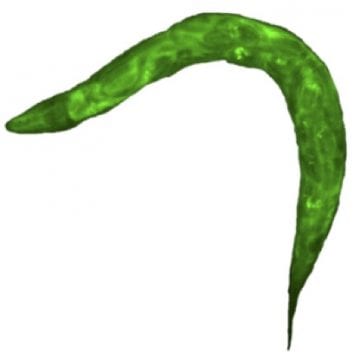 For the projects funded by the Finnish Work Environment Fund (2015-17) and by the University of Turku (2018-19), we acquired transgenic nematode strains carrying stress-responsive fluorescent reporters. Our promising preliminary results suggest that they can be utilized to biomonitor sublethal effects of environmental factors such as heavy metals or indoor air toxins. With the mentoring support from the SPARK Finland program (2020-21), we are now developing a C. elegans-based indoor air diagnostic test, with which we could distinguish between healthy and harmful buildings also under field conditions. https://sparkfinland.fi/wp-content/uploads/2020/01/toxelegans-project-overview.pdf