The project aims at getting a whole-genome picture of the ancient inhabitants in North-East Europe: Finland, North-Western Russia, and the Eastern Baltic region. The main questions combine the fields of biology, linguistics and archaeology, and include: Who were the people who lived here in the ancient times? How has the inhabitants’ genetic composition changed over the centuries – and the millennia? When did the Finno-Ugric speakers, the historically recorded native language family of the region, arrive in the area? With which archeological remains (also called archaeological cultures) they can be connected? Who lived in the area before the Finno-Ugrians arrived? Or, did the Uralic language family arrive with a speaker population in the first place, or was the language mainly adopted for some other reason by the local inhabitants?

To fulfill these aims, we sequence ancient human remains from North-East Europe. The project is based in the University of Helsinki, Finland, and works in close collaboration with the Max Planck Institute for the Science of human history, Jena, Germany, the University of Zürich, Switzerland. The obtained genomes are compared in a population genetic framework with each other and with present-day populations of the region. The results are also reflected against up-to-date linguistic and archaeological data in collaboration with numerous specialists of these fields. 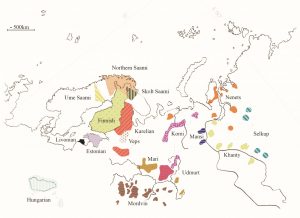 In Finland, human remains rarely preserve for more than 1,000–1,500 years due to the acidic soils of the area. Consequently, the part of the project focusing on Finland deals with the time period from the Iron Age up to the 19th century. To trace the development of genomes further back in time, samples from areas previously or currently inhabited by the Finno-Ugric peoples are analysed. In practice, this means obtaining samples from archaeological contexts dating to all periods of prehistory: the Mesolithic and Neolithic Stone Age, the Bronze Age, the Iron Age and the medieval and early Historical periods. Our area of interest covers the forest and forest steppe zones of the eastern Baltic Sea area, northern European Russia and western Siberia, but also samples from other neighboring regions and pertaining to adjacent archaeological cultures will be used as reference material in studying the development and contacts of different populations.

Figure: part of a skull.