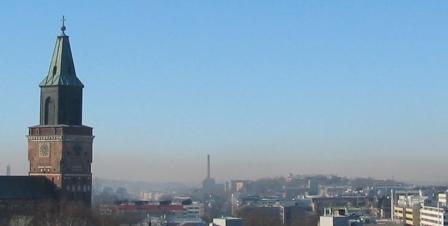 The Department of Geography initiated the Turku Urban Climate Research Project (TURCLIM)  in 1998 by setting up a network of temperature loggers in and around the city. The rationale of the project was to study spatial patterns urban climate with the aid of permanent weather data collection system. The project was also foreseen to facilitate educational purposes in e.g., urban climatology and data processing/analysis techniques. The project has become a permanent part of Department’s research activities with strong collaboration with the Finnish Meteorological Institute and the Turku Environmental Protection Office, and was transformed to Urban Climate Research Group in 2010.
Urban areas are special cases for climatological research, since their physical structure differ markedly from any other type of landscape and, additionally, the human activities themselves contribute to the climate by for example artificial heating. One feature of urban climate is the urban heat island UHI, which refers to relative warmness of the city as compared to the surrounding rural areas. The pivotal reasons for UHI are differences in anthropogenic heat release and solar heat storage between urban and rural areas. UHI is a challenging research topic and of high interest in the era of climate change, as the number of urban dwellers is growing fast globally. Due to variable topography and coastal location, Turku (60º27 N, 22º16 E) is a demanding and interesting research environment for urban climatologist.
This website includes basic information about the Research Group as well as data and welcomes those interested about it to take part in its activities.

In autumn 1998 professor Sakari Tuhkanen and Jukka Käyhkö of the Department of Geography of Turku University initiated the Urban Climate Research Project. Its first aim was to build up a dataset that allows research after the spatial and temporal variability of temperatures in and around the city of Turku. Furthermore, the project should provide opportunities for education in e.g. urban climatology and data processing/analyses techniques. In order to reach this aim, plans were made to establish a network of temperature loggers and weather stations, which collect continuous data for at least several decades.
The early history of the project is fully described in the project’s baseline document that can be found as an attachment at the bottom of this page.

Planning of a project

Due to the highly variable topography and strong influence of the sea, the Turku (60º27’N, 22º16’E) area is a demanding and interesting environment to study local and regional climate. In order to cover all the important environmental features, up to 60 temperature loggers were planned in and around the city. At the time the project was launched, no other projects of its kind were known that had a similar dense measuring network. This makes the TURCLIM project quite unique.
Table 1. Basic information about research area.
Several different factors were taken into account when planning the temperature logger network. The goal was to build a representative, but also save and durable network. In order to accomplish that, loggers had to be properly distributed over the research area and placed on open fields with a horizontal grass surface, undisturbed by any shadowing objects. In order to prevent sabotage, loggers were supposed to be put to a height of 3 meters instead of the standard 2 meters. In case a location of interest (normally defined from maps) would after all not meet these criteria, the idea was to look for the best possible compromise between optimum and possibilities in the nearby surrounding.
In order to obtain more detailed climatological data, four more advanced weather stations were planned to be installed. The installation of the weather stations was planned such that the temperature probe would be situated at a height of three meters above ground level.

Important phases of the Urban Research Project so far