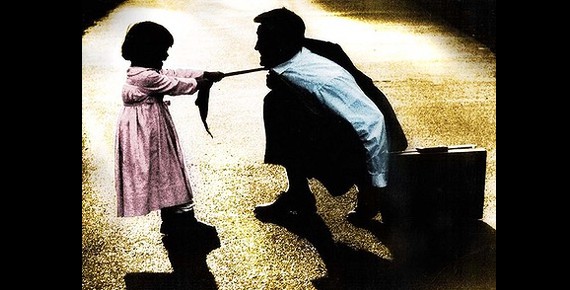 Post-modernity turns fear into a set of beautiful, ugly and humorous carnival performances, interpreted in the performances western parents put in child-rearing, due to the highly contradicting social spaces they live in. The post-modern spaces of fear and risk, Frank Furedi argues, reproduce loving and problematic parents in the West who on the one hand, excel in the nurturous role of parenting, while on the other, suffer from the social stigma of incompetent and over-reactive parents.

Erving Goffman’s theory of social space shaping the social roles in our societies, helps analyse the way in the West, parents are often forced to carry contradicting social roles, due to two specific metaphors persistent in their societies: the ‘vulnerable child’ and ‘child at risk’. It is in these fear induced metaphoric spaces where also Mikhail Bakhtin’s ideas of the carnival and laughter flourish, as this scene with the images of the adult–child myth reveals.

‘Let’s go home and eat Daniel’, said the mother. ‘No, I want to go to MacDonalds!’ cried the little boy. So they ended up in their usual place. Ordered the same unhealthy mean-looking grease-layered sandwich. After their meals the mother took a long breath and said: ‘would you like to go home, or can we go and fetch the car from daddy’s place?’ (El-Mahgary 2015)

When parents and children start exchanging social roles, a social and moral panic erupts. Vuokko Nissinen believes that grown ups are no longer grown ups. They have become too pleasing to children, always asking them what they would like to do. The distinguished British sociologist Frank Furedi portrays the social panic and irrational behaviour of parents as a result of excessively industrialised and informative societies that install fear, vulnerability, and uncertainty in individuals, and disregard the resilience of children to cope with traumas.

‘Little Johnny, plays football graces his knees, he will be damaged for life … The two most important metaphors we use to refer to children today are child at risk and vulnerable child. But at risk from what?’ he asks. ‘Everything, and everyone…’ The very social space that shapes their social roles into children at risk. (Furedi 2011)

In the post-modern world, the old official, and strict, are replaced by the new spaces of laughter, and the carnival, when fear becomes part of our every day lives, and the ‘child at risk’ also the ‘vulnerable parent’, thus, dissolving the traditional boundaries and social roles between the parent-child.

Laila El-Mahgary is a PhD student of musicology.

El-Mahgary, Laila: ‘The carnival and the adult–child myth’, an unpublished manuscript, 2015