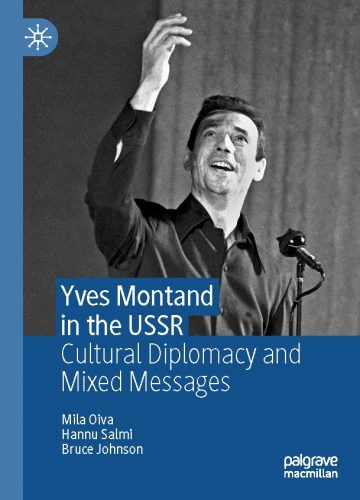 This volume is the first book-length account of Yves Montand’s controversial tour of the Soviet Union at the turn of the years 1956/57. It traces the mixed messages of this internationally visible act of cultural diplomacy in the middle of the turbulent Cold War. It also provides an account of the celebrated French singeractor’s controversial career, his dedication to music and to peace activism, as well as his widespread fandom in the USSR. The book describes the political background for the events of the year 1956, including the changing Soviet atmosphere after Stalin’s death, portrays the rising transnational stardom of Montand in the 1940s and 1950s, and explores the controversies aroused by his plan to visit Moscow after the Hungarian Uprising. The book pays particular attention to Montand’s reception in the USSR and his concert performances, drawing on unique archival material and oral history interviews, and  analyses the documentary Yves Montand Sings (1957) released immediately after his visit. – More information on the book at the Palgrave website.

For the book we collected information on the Soviet made Montand recordings and postcards from various sources. The lists are most likely not comprehensive, but we will share them here so that they can be complemented and used under CC-BY license:

Discography of Soviet recordings of Montand

Discography of Soviet recordings of Montand