The main research interests of the group focus on observational work on extragalactic astrophysical transients and range from detailed studies of individual supernovae​ and their progenitor stars to extremely energetic transients at the centres of galaxies. We make use of observations at a wide range of wavelengths from radio, optical and infrared to X-rays. For this we use ground-based telescopes, e.g., the Very Large Telescope (VLT) of ESO and the Nordic Optical Telescope (NOT) as well as data from space telescopes such as the ESA Gaia, NASA Spitzer and ESA/NASA Hubble space telescopes and the NASA Chandra X-ray Observatory.

The current very wide-field transient searches are increasing substantially the supernova statistics locally covering a large fraction of the whole sky every few nights and in a less biased manner than was possible before. However, most of the transient searches are working at optical wavelengths affected by dust extinction and are limited by ground-based seeing making the detection of supernovae especially within the dusty and often bright and complex central (<1 kpc) regions of the most strongly star-forming galaxies challenging. Therefore, the rates and properties of the supernovae occurring within the nuclear and circumnuclear regions of these galaxies have remained largely unexplored. In particular, our SUNBIRD collaboration has been working on high spatial resolution adaptive optics infrared searches and studies of supernovae within the nuclear regions of luminous infrared galaxies (LIRGs). The group has also interest in detailed studies of star formation properties of LIRGs which are the most prolific supernova factories and dominate the massive star formation (and thus also core-collapse supernova rates) from redshift ~1 onwards.

While thousands of supernovae are discovered each year, luminous transients occurring within the nuclei of galaxies have been largely missed by the surveys or overlooked as ordinary active galactic nucleus (AGN) variability, being essentially a blind spot of the research community. Our recent discoveries of particularly interesting cases include a new class of extremely energetic transients in nuclei of Seyfert galaxies and a dust-enshrouded extremely energetic tidal disruption event in a luminous infrared galaxy. The latter event was discovered independently by us at infrared wavelengths and by colleagues working at radio wavelengths. It was originally interpreted as an extremely energetic supernova but turned out to be one of the most energetic tidal disruption events observed so far. The transient was not bright in the optical light due to the large amount of interstellar gas and dust within the galaxy centre but was luminous at infrared and radio wavelengths for over a decade. Our infrared observations characterized the energetics of the event whereas high spatial resolution radio observations revealed a fast-moving (a quarter of the speed of light) outflow, so called jet, here seen directly for the first time in the case of a tidal disruption event. We suggest that this event could be just the tip of the iceberg of a hidden population, more common when the Universe was much younger than today. 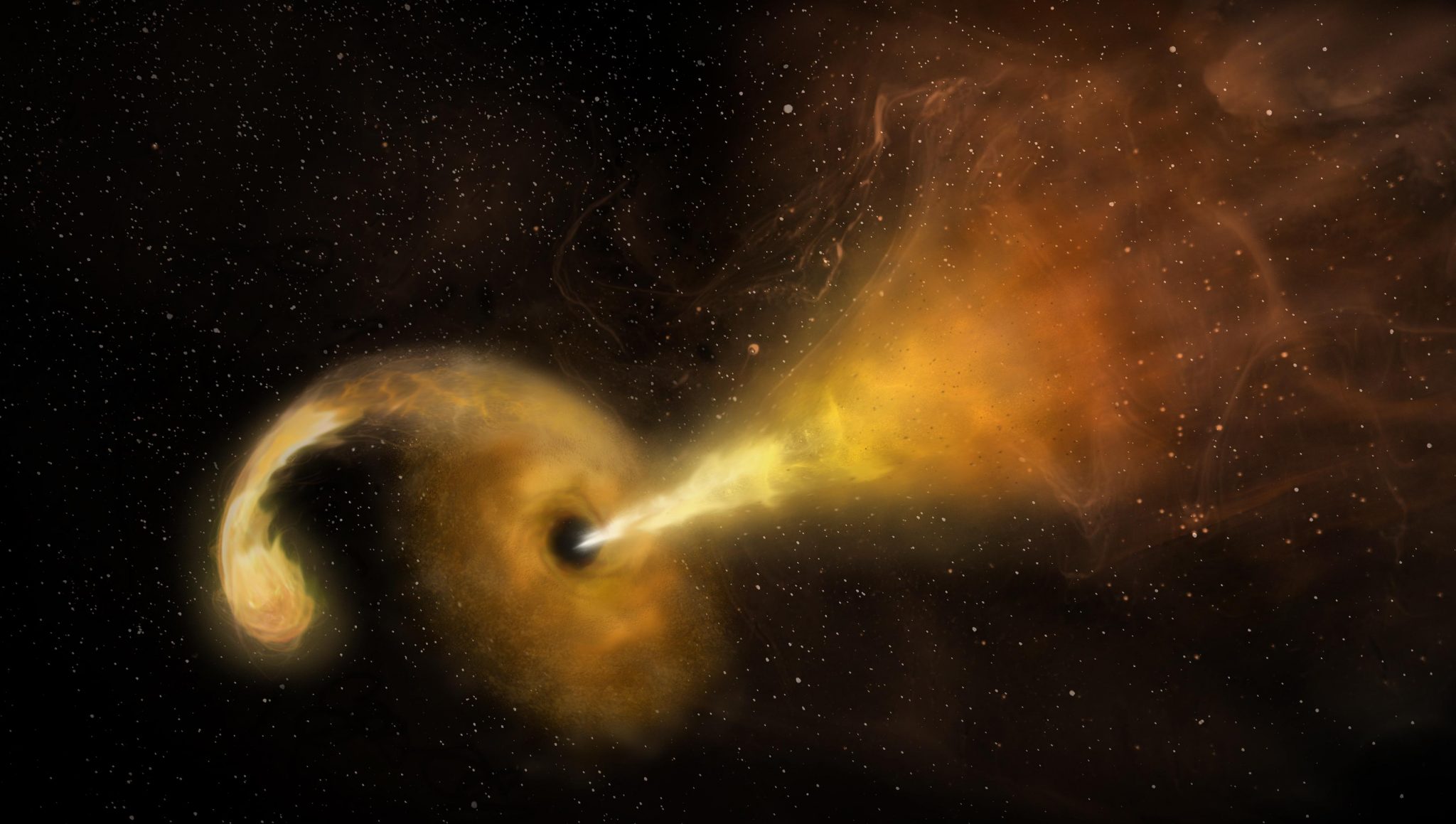 A straightforward way to study core-collapse supernova progenitors is to detect the progenitor star directly in pre-explosion high-resolution images. However, by examining the environments of supernovae, one can use larger and statistically more robust samples of objects to extract information about their progenitors. The properties of the supernova progenitors can be derived from the stellar population at the explosion site, from which it emerged. The age and metallicity of supernova explosion sites can be studied using integral-field spectroscopy to examine the stellar populations at the explosion sites and find out what effect the lifespan and metallicity of the progenitor star have on the resulting supernova. We have been working on quantifying the average masses of the progenitor stars inferred through association between the supernova sites and young massive stars, using the H-alpha and near-ultraviolet emission of the galaxy as a tracer of massive stars. One relatively unexplored method that we have also used to constrain the progenitors is to search for high-mass X-ray binaries at the supernova locations in pre-explosion X-ray observations. In a high-mass X-ray binary, one star has already exploded as a core-collapse supernova, producing a neutron star or a stellar mass black hole, and it is likely that the second star in the system will also explode.

The remarkable discovery that the expansion of the Universe is accelerating was based on type Ia supernovae, and was awarded the Nobel Prize for Physics in 2011. The implications of this discovery are still being explored. In spite of the important role that type Ia supernovae have played in this discovery, their origin is still debated. We are leading several projects in close collaboration with theoreticians in an effort to understand the physics that gives rise to the observed properties of SNe Ia. We are also actively pursuing a diverse range of thermonuclear explosions — the so called ”faint and fast” transients that are fainter than normal thermonuclear SNe and evolve faster. These will be discovered in abundance by the next generation surveys.

Supernovae interacting with their circumstellar medium can be identified in most cases based on narrow hydrogen (and/or helium) emission lines in their spectra arising from excited slowly moving circumstellar gas. In such objects the kinetic energy of the rapidly expanding supernova ejecta ram into the slow-moving circumstellar gas and is being transformed into observable radiation adding to the brightness of the supernova. Roughly 5 to 10 percent of core-collapse supernovae originate from a progenitor star (e.g., certain red supergiants and luminous blue variables) with a sufficiently strong mass loss prior to the explosion resulting in a dense circumstellar medium. The mass loss can be in the form of strong stellar winds and/or eruptive ejections of matter during the late stages of their lives. We have carried-out detailed follow-up observations of supernovae interacting with the circumstellar medium using e.g. the NOT and the ESO telescopes. Such observations shed light on the mass loss history and thus the properties of the progenitor star in the final phases before exploding as a supernova. High resolution spectroscopy is essential in the follow-up observations to resolve the narrow line profiles and characterize the properties of the circumstellar medium.

In contrast to type Ia SNe, there is a direct observational evidence that the progenitors of type IIP SNe are red supergiants. They are the most common variety of core-collapse SNe and are characterized by an extended plateau lasting about 100 days in their light curves which is due to hydrogen recombination at approximately constant luminosity and gives the class its name. Type IIP SNe are also the most homogeneous subset of core-collapse SNe. They can be used to derive accurate absolute distances, using a variant of the Baade-Wesselink method, originally used to determine distances to pulsars. Basically, the distance is determined by comparing the photospheric angular size with the expansion velocity measured from spectral lines. Although type IIP SNe are fainter on average than the type Ia SNe, the current generation of surveys are routinely yielding type IIP SNe at cosmologically-interesting redshifts, and existing instrumentation is sensitive enough to permit the necessary follow-up observations. We have led a large-programme at the 10m GranTeCan telescope on La Palma to populate the type IIP Hubble diagram.

Several months to years after the explosion, the expanding supernova ejecta become optically thin. The spectra then become nebular, characterized by dominant emission lines. This reveals the emissions from the inner parts of the exploding star, hence allowing the observation and study of the heart of the star that would otherwise be hidden from view, thus revealing the inner stellar structure and chemistry, the explosion geometry and mechanism. Such a powerful technique is unfortunately challenging, as SNe fade away and become very difficult to observe at late times, resulting in low number of available nebular spectra. We have been conducting FOSSIL (FORS+ Survey of Supernovae in Late Times) at the ESO Very Large Telescope, a survey to obtain a large number of SN nebular spectra that has been running since 2017. From a large sample containing various types of SNe, analyses on the core properties such as the relation between core mass and SN type can be done. This technique provides an independent constraint that complements the progenitor studies from other methods such as environments study and high-resolution archival images.