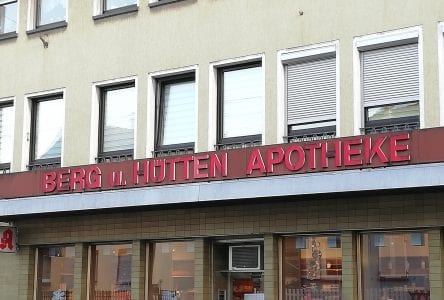 Among a small group we, two German students from Saarland University, had the privilege to accompany Professors Leena Kolehmainen (Dep. of German language) and Anna Sivula (Cultural production and landscape studies) from University of Turku on their Erasmus teacher exchange in Saarland and gain valuable insight into their fields of research.

In December 2019, we gathered then delved into the realm of industrial heritage, found in the way language is being used.

The seminar “Linguistic heritage of industry” was organized by Dr. Andrea Wurm (Language science and technology) from Saarland University and was part of a cooperation project with the University of Turku. It consisted of lectures from our three professors, excursions to some local industrial sites, and work to be done by students.

For this seminar, we looked at the industrial history of Varkaus, a small city in the region of Northern Savonia, as well as Völklingen and Friedrichstal, two cities in Saarland, all of which share a sumptuous and abundant history in their industrial past and were heavily shaped by it.

It’s all about multilingualism

All of these past influences on language constitute something which in research is called linguistic landscape, one of Prof. Kolehmainen’s study fields. This term of sociolinguistics was established in 1997 by Canadian researchers Rodrigue Landry and Richard Y. Bourhis and amounts to how languages are apparent and visually present in public spaces. Thus, in researching the linguistic landscape of a place, one focuses mainly on multilingualism and its many facets, and accordingly takes a glance at publicly available information like posters, signs of any kind (e.g. shops, services, streets, buildings), or even graffiti.

In any given multilingual setting, the choice of languages on public signs can teach us a lot about the relationships between language and society. Can power be conveyed through the selection of which languages are featured on a sign? Are linguistic ideologies being portrayed as well? What can be said about the representation of minorities and their languages?

These, among many, are possible questions for a researcher in this field to ask in future studies yet to come.

A more personal glimpse into the matter

However, aside from the public sphere, like street signs or billboards, language can have a very personal significance. What is a means for private individuals to shape their own linguistic landscapes? One possible answer is graveyards.

For this, Prof. Kolehmainen, in her previous research, took a close look at the three oldest cemeteries in Varkaus, whose oldest burials date back to as early as 1864.

While looking at all of the engravings on the tombstones she found traces of migration which were brought about by industrialization in the early 19th century.

We were presented with pictures of several tombstones that featured not only writings in Finnish, but also in Swedish or German. These inscriptions lead back to the former workers who lived in the area along with their families.

Interestingly, we saw one headstone with a Russian engraving on its backside which was probably meant to inform posterity about the stonemason’s atelier, rather than the deceased.

Additionally, the data thus obtained proved important to study both the occurrence and origin of family names, which Prof. Kolehmainen refers to as namescape. Again, this namescape turned out to be multilingual. What does this linguistic variation tell us?

Is it feasible to classify the surnames by language? What do personal names tell us about the place, its history, and people?

Another interesting aspect Prof. Kolehmainen had found was a significant change in culture of remembrance: over time the prevalence of multilingual texts on tombstones faded away. In addition the linguistic landscape in the graveyards was also influenced by the translation of texts; for example quotes from the Bible. Some surnames themselves were even translated: names like Lundson became Lumiala, or Hårdh became Hahtala.

It is important to note, however, that the linguistic landscapes in graveyards do not directly represent the languages actually spoken in the area!

For our own research, we visited the local cemetery of Friedrichsthal in order to find local traces of previous industrial activities, which might have found their way onto some of the tombstones.

Hard to miss were some of the roads who had their names’ motivation clearly in the city’s former mining and glass industry. For example Glashüttenweg (translates to glass foundry lane) or Knappenweg (mineworker lane) are clearly referring to the area’s industrial past, which is still visible to this very day through linguistic landscape.

We attempted the same for Völklingen Ironworks, which is the most famous industrial sight of Saarland with around 225 000 visitors for the year of 2019. The industrial plants were originally founded in 1873 and decommissioned in 1986. Since 1994, they have been part of UNESCO World Heritage.

Strangely it turned out to be somewhat harder for us to actually make out a linguistic landscape within this gigantic foundry. It being an industrial site, it was fairly obvious that technical terminology, warning signs, and instructions would also be about this branch of craftsmanship. Would it have yielded more information to have wandered the streets of the modern city of Völklingen in order to make out some more possible foundry lanes or molder roads?

On December 6th, the day after our excursion, we stayed at the university because the schedule contained different points such as group work or presentations hold by the lecturers. At first we listened to what Prof. Anna Sivula told us about industrial history in Finland. An interesting fact to mention is that the industrial history in Finland is a bit different to this one in Germany. The Saarland has its history mostly in ironworks and mines whereas Finland is rather known for its wood and paper industry. During the presentation Prof. Sivula also mentioned the former importance of the spinning mills for the people e.g. in Pori.

After the presentations of the lecturers, we worked more practically in groups. Our task was to analyze the data that we collected during the excursion. There were different approaches, e.g. terminology and technical communication, onomastics and language contact. The analysis was based on the pictures of the linguistic landscapes we took during the excursion to Friedrichstal and Völklingen. These data contained place names, street names, commercial names and names and writings on objects. The data were analyzed for example according to the origin and motivation of the names.

As one of the last points in the seminar, the preparation and presentation of a poster was scheduled. This form of presentation might have been new for some of us but it was a good method to summarize the knowledge and the latest findings of the seminar. We had to do it as group work again and each group created individually its poster. The posters had to contain a title, technical terms and research questions but also what questions we could ask beyond it. Furthermore, we had to write down what we have learned as well as the results of the analysis. Following to the preparation of the poster, each group had to present it to the other students and the lecturers so that everybody could profit from the results.