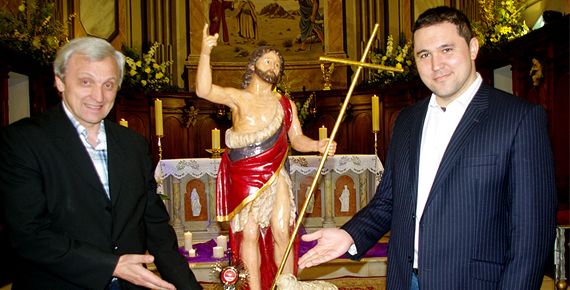 I started in January 2017 as a TIAS Collegium Research Fellow at the Department of Archaeology. I am researching ancient relics, objects that materialise shared memories, acting as repositories of cultural identity. I am particularly interested in those said to be from an early Christian context, which can be traced over the longest chronological period and broadest geographical area. Rather than ‘authenticate’ such relics (virtually impossible), my aim is to improve our understanding of their origins, circulation and veneration. My work involves acquiring new data from these objects, setting this information within the historical and material context, and drawing new conclusions from the results.

When I began my career in Classics and Archaeology at Oxford, the evidence for the cult of relics consisted of context material (reliquaries, altars, shrines, texts), while the relics themselves were largely silent witnesses. However, over the past decade or so, scientific advances have made it possible to derive important information (e.g. date, diet, genetic and geographical origins) from a tiny sample, making such research acceptable to most church and museum authorities. Since 2011, I have collaborated with Prof. Thomas Higham, deputy director of the Oxford Radiocarbon Accelerator Unit (ORAU) and an eminent figure in the field of scientific dating, especially of human remains. We have conducted a number of studies on ancient relics, including remains reputed to be of St John the Baptist which dated to A.D. 30! In 2015, we founded the Oxford Relics Cluster at the university’s Keble College Advanced Studies Centre, allowing experts from different disciplines to shared research in ancient relics, including regular seminars.

For the past ten years, UTU’s Prof. J.-P. Taavitsainen, together with Aki Arponen (National Board of Antiquities), has been conducting one of the leading interdisciplinary relic studies – the Turku Cathedral Relics Project. This relic cache, discovered in the Cathedral in the early twentieth century, is a major part of Finland’s early material heritage. Taavitsainen encouraged me to apply for the TIAS position, which provides a flexible opportunity to conduct interdisciplinary research for up to three years. While continuing my broader studies on the origins, history and circulation of relics, it also allows time to develop this new field of relic studies and to take part in the Turku Cathedral Relics Project within the context of my wider research. Finally, taking advantage of the presence in Turku of Finland’s national PET Centre for Biomedical Imaging and other leading scientific facilities, I instigated a general meeting of scientists and archaeologists for the study of ancient relics. A grant application for a joint study is now in progress. It is hoped that this study will form a valuable platform for collaborations in archaeological science at the University of Turku.