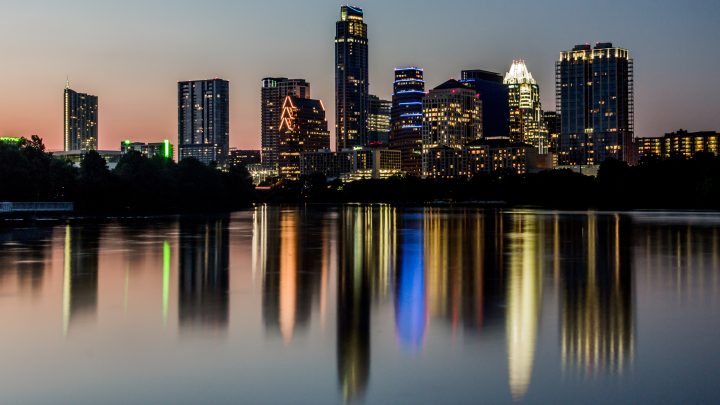 This year’s eMBA foreign study journey took us to USA and Austin, Texas. Texas is interesting for many reasons, e.g. the fact that it is not a very familiar /common travel destination to Finns. Thus, it was surprising also to many eMBA students to learn for instance that Texas is ranked no.1 in USA for business recovery and job growth, or that in Austin, the unemployment rate is only 3%! TSE exe has worked successfully with McCombs School of Business (part of University of Texas at Austin) for many years, continuously developing and co-creating a diverse week-long study programme complementing the eMBA Turku curriculum. We also appreciate the fact that McCombs eMBA programme is internationally highly ranked, e.g. number 18 in 2015 by The Economist.

Our travellers came from two different cohorts, 2014 and 2015 – i.e. this study journey gave yet another possibility for the students to learn to know new people and expand one’s networks. And the magic always happens: two groups become one very soon on these journeys. The joint experience is powerful and important – as eMBA students put it:
“Our two groups of eMBA 2014 and 2015 were active and we had fun! There were interesting conversations and inspiring group work in which people participated enthusiastically, despite of the jetlag…” Katriina Virtanen
“The program was well balanced, after lectures we had enough time to spend with colleagues to get to know each other even better than before – team building!” Jarno Yli-Junnila

As stated in the title, everything is bigger and better in Texas – but the same applies also on general level in USA. The scale of doing things is overwhelming – e.g. Halloween which was celebrated the weekend we arrived to Austin. As Jarno Yli-Junnila says: “I realized how big thing Halloween is when we arrived in Austin late at Saturday night. People had put a lot of effort to costumes. Bars and restaurants were full of happy people, good music and cold drinks. According to National Retail Federation estimation Halloween spending in U.S. (including “only” costumes, candies, decoration and cards) will be over $7 billion annually. To put that in context – yearly spending for Finnish national defense is a bit below €3 billion…”

The people are extremely proud of their own state and hometown, they use all the positive adjectives in their vocabulary to tell this in every possible occasion – and it certainly feels that we Finns would have a lot to learn in branding and praising our own country, people and knowledge!
One theme strongly present during the week, both in the interactive style of the professors as well as one specific lecture was advocacy skills.

“Great example of advocacy skills was professor Doggett who introduced us the concept of “Ugly baby glasses”. It means that you have to look at the facts objectively, not just the image of your company from the inside. Usually the facts make you see that you really have to change. “If it’s not broken, break it.” This is extremely relevant today when all the rules of business are changing. Game-changing technologies destroy total industries and in the global atmosphere the role of China and India is growing so much that too few companies understand it. Is it the time to put those glasses on in your business?” Katriina Virtanen says.

Moreover, during the week we discussed e.g. global marketing and branding, macroeconomics from US perspective, geopolitical environment as well as motivation and engagement and creativity from different angles. Versatile contents, broadening our minds, with excellent speakers! Apart from great sessions in-class, we did also company visits to Whole Foods and iFLY and discussed Finnish success in USA with serial entrepreneur, Smart Picture 3D founder Kari Myllykoski – giving us even more food for thought regarding U.S. business and way of life.

All in all, the week could be summarized like this:
“Tired but happy, definitely worth of money and time we all have invested to the trip. Time we spent together with colleagues in UT was amazing, not only “quite okey” as we normally say in Finland – seems that some Texas superlatives has stuck to a humble Finn.” Jarno Yli-Junnila

How about you – are you ready to expand your own horizons, learn new things and gain new networks? eMBA2016 application period is NOW… Learn more from www.embaturku.fi