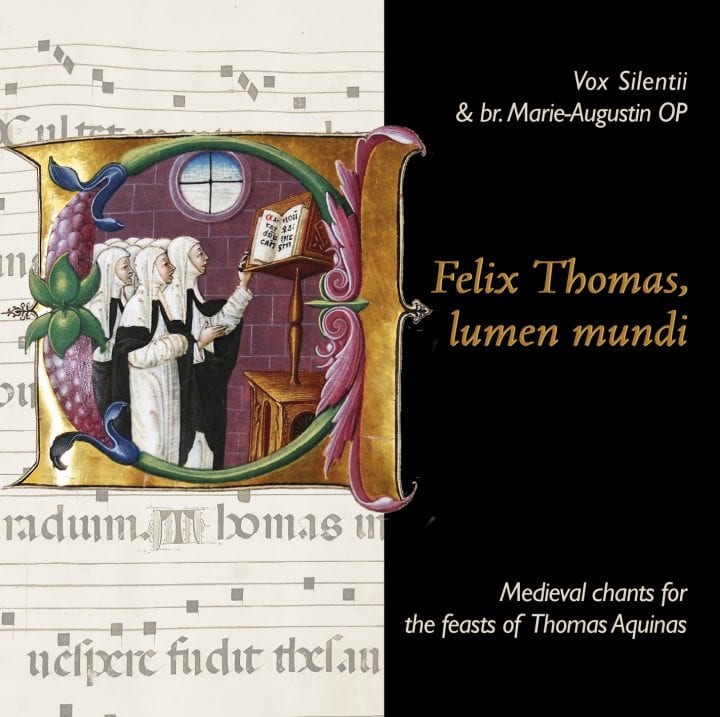 The recording of the CD is a part of a joint research and artistic project on sensory experience of medieval feasts of Thomas Aquinas, funded by the Kone Foundation.

Programme / Ohjelma (the talks are in Finnish)

Free entry, no booking. The Great Hall has places for 100 people

You are warmly welcome!

Abbreviated presentation from the booklet of the CD:

The record Felix Thomas lumen mundi presents Thomas first and foremost as a saint – an approach that has often remained in the shadow of his learning. The chants are from the liturgy of two medieval feasts that the Order dedicated to Thomas: the feast of dies natalis and the translatio.

Out of the total number of over 60 chants we have selected 28. They describe Thomas’s doctrine as enlightening the world, and the miracles reported as taking place at his tomb in Fossanova. One topic is emphasized over the others: that the bones of the saint emit divine power, heavenly brightness and sweet perfume. In the dies natalis liturgy, Thomas’s relics were the focus of the desire and longing of the Dominican friars. Although the corpse lay at the Cistercian monastery, it was perceived as present to the friars through the liturgy. The translatio feast transmits the deep joy of the Dominican Order at having finally obtained the relics of their beloved brother for one of its churches.

The chants are remarkably consistent, and only small variants are present in different manuscripts. In both liturgies, the chants basically follow the modal order from one to eight. We have tried to respect this sequence of modes on the CD.

The liturgies primarily employ three verse types, the use of which is highly contextualized. The hymns have been composed in a variant of the Ambrosian iambic dimeter (e.g. Aurora pulchra rútilans). The antiphons also make use of the goliardic verse, probably best known to us from the Carmina Burana (e.g. Matri vitae iam ereptum / vivum reddit filium), whereas the predominant verse form of the responsories is a ten-syllable line with a rising cadence (Felix Thomas / doctor ecclésiae), which, being the most ”prosaic” of the three, lends itself best to sustained narrative.

Established in 1992, Vox Silentii (Johanna Korhonen and Hilkka-Liisa Vuori) sing, teach, and study medieval liturgical music. For recording Felix Thomas lumen mundi Vox Silentii invited a special guest, brother Marie-Augustin Laurent-Huyghues-Beaufond, a friar of the Order of Preachers who lives in France. Brother Marie-Augustin brings to the CD his insights to the history of the Dominican liturgical chants and will perform the premiere concert Felix Thomas lumen mundi together with Vox Silentii in October/November.

The CD was recorded in the Naantali church, an original church of Birgittine monastery in medieval Finland. The chants for Thomas Aquinas’s feasts belong to the liturgical history of Naantali which, together with the whole medieval diocese of Turku, had close ties to the Dominican liturgy up to the Reformation.

Featured image: From the CD cover, designed by Eeva Herrala and Marika Räsänen