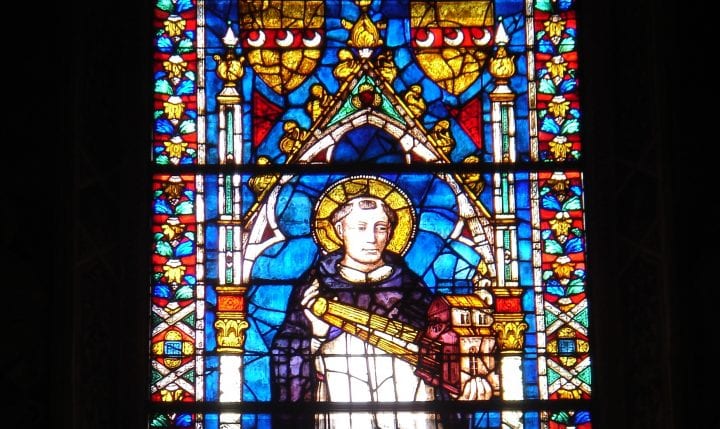 Thomas Aquinas died on 7 March 1274 and when Pope John XXII canonized him some fifty years later (1323), the day of 7 March was ordered to be celebrated annually as Thomas’s feast, dies natalis, with great solemnity.

In the Dominican church Thomas’ feast was celebrated in the highest liturgical category. This meant among other things that the annual festivities began already on the eve of the dies natalis.

At dusk on the eve of the feast, the friars or the nuns of the Dominican house gathered under candlelight for the solemn vespers at the choir of the church. According to the medieval breviaries, at the choir the commemoration began with the antiphon:

Blessed Thomas, teacher of the church, light of the World, splendour of Italy, a virgin shining in the flower of his purity, rejoices in his twofold crown of glory. (Translated by Seppo Heikkinen)

And continued with the second antiphon:

The doctor, a citizen of the heavens, adornment of the World, leader and light of the faithful, the norm, limit and law of all manners, a vessel of virtue, ascends to the reward of his life. (Translated by Seppo Heikkinen)

Moreover, the hymn for vesper depicts Thomas as a new sun, a fount of light and knowledge. As the sun or fount Thomas shone with heavenly light, helping man to understand better the divine Scriptures and the rules of truth. Thomas’ three main achievements, the same which were emphasized in the lead-up to the canonization, are clarified lyrically in the following way: “The effulgent rays of his wisdom, the light of his spotless life, and the splendour of his miracles, have filled the universe with joy.” These words summarize Thomas’ spectacular intellectual and enlightening abilities, both in life and in death in the vesper.

The metaphorical illumination seems to have been the leading theme of the vesper rite, enhanced by the actual flickering lights of the candles. For medieval people, the metaphor of the enlightening rays spoke of Thomas’ wisdom and his works, from which the friars hoped to seek guidance for their lives. Thomas brought the light into the night in a very real way as well. The words of the vesper may also have had a symbolical meaning related to the passing of the seasons, particularly to the lay audience, as the daylight lengthened in spring. However, in the general darkness of the night of March, the light, which was real as well as envisioned through the chant, created a suggestive atmosphere for the beginning of the feast.